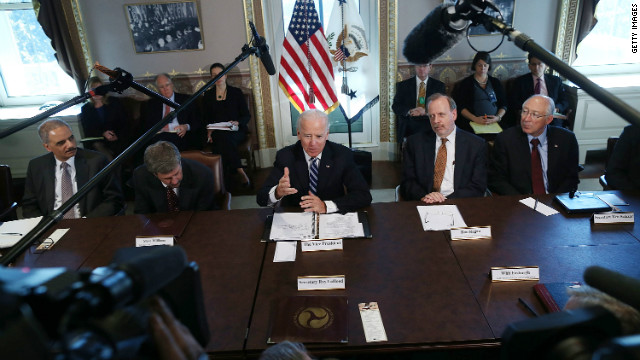 DEVELOPING: BIDEN RECOMMENDATIONS ON CURBING GUN VIOLENCE TO COME BY TUESDAY… A federal task force looking for ways to curb gun violence will have a set of recommendations by Tuesday, Vice President Joe Biden announced. Speaking during a week of meetings with disparate groups on various sides of the issue - including some for and others against stricter gun controls - Biden, who oversees the task force, said the recommendations, to be given to President Barack Obama, will serve as a beginning. “This doesn't mean it is the end of the discussion, but the public wants us to act,” he told reporters. – Josh Levs

BLISTERING NRA RESPONSE: “We were disappointed with how little this meeting had to do with keeping our children safe and how much it had to do with an agenda to attack the Second Amendment,” said a statement from the NRA. “While claiming that no policy proposals would be ‘prejudged,’ this Task Force spent most of its time on proposed restrictions on lawful firearms owners – honest, taxpaying, hardworking Americans. It is unfortunate that this Administration continues to insist on pushing failed solutions to our nation's most pressing problems. We will not allow law-abiding gun owners to be blamed for the acts of criminals and madmen. Instead, we will now take our commitment and meaningful contributions to members of congress of both parties who are interested in having an honest conversation about what works – and what does not.”

HICKENLOOPER’S PROPOSAL: COLORADO GOVERNOR WANTS UNIVERSAL BACKGROUND CHECKS ON GUN SALES… “Let me prime the pump: Why don't we have universal background checks for all gun sales,” he said, prompting a long standing ovation from the crowd of state lawmakers and law enforcement workers. Federal law exempts gun purchasers from undergoing background checks during private transactions, including at gun shows. However, the first-term governor said it's "not enough" to focus solely on weapons. He also requested support for a “comprehensive overhaul” of the state's mental health system that will “make it easer to identify people with mental illness who are a danger to themselves and others.” – Ashley Killough

TRAIL TRIVIA
(Answer below)
Who was the first president to travel abroad during wartime and where did he go?

Even with all that responsibility, many still see Biden as the White House’s affable gaffe machine. Sure, the vice president is possibly the only administration official who, in the course of an hour, can charm a 90-year old grandma, get a baby sworn into the Senate and comment on another man’s “pecs.” But does viewing him as a folksy, charmer downplay his chances in 2016?

In a column for the Bloomberg View, Ezra Klein argues yes.

“In the continuing drama that is the Obama presidency, Biden often appears as comic relief. He’s the zany neighbor, the adorable uncle. As a result, his presidential ambitions, which burn brightly even today, have mostly been laughed off. Somehow, the sitting vice president of the United States, the former chairman of both the Senate Foreign Relations Committee and the Senate Judiciary Committee, a man who’s on a nickname basis with many of the world’s most powerful leaders, is seen in many quarters as lacking the gravitas to be president.

Klein is not the only politico with this opinion. Donna Brazile, a CNN contributor and former Vice President Al Gore’s 2000 campaign manager told Paul Bedard at The Washington Examiner that “Yes, Joe Biden is truly top tier for 2016. … Along with Clinton, he will be seen as a front runner for the job.”

While neither Clinton nor Biden has declared any intention for 2016, the future of two people close to Obama become more interesting as Jim Messina, the man who helped lead Obama and Biden to victory in 2012, is planning to fire up the campaign’s infrastructure to be ready for future races.

As Mark reported last night: “In addition to a national grassroots infrastructure, the campaign also maintains a massive e-mail list that it can use to mobilize supporters and seek donations. The Obama campaign won’t discuss how large the e-mail list is, but a source said that it is “much bigger than the 14 million e-mail addresses” it had amassed after the 2008 run. The campaign also made a concerted effort to collect cell phone numbers and frequently used text messaging to fundraise and organize volunteers.”

Leading CNNPolitics: How the NRA wields its influence
No new gun laws. The National Rifle Association has made its position clear, even amid America's most recent gun debate. It says enforce the gun laws already on the books. It's well-known that the organization has actively lobbied to prevent new legislation limiting guns. The NRA says it is simply ensuring that taxpayer money isn't being used to promote a political agenda. “If gun control groups ... (and) individuals want to further their research, we're not saying they shouldn't be able to do it,” NRA spokesman Andrew Arulanandam told CNN. “We're just saying they shouldn't be using public funds to do it.” – Tom Watkins

Leading Drudge: NRA Ranks Soar
The National Rifle Association has gained more than 100,000 new members in the past 18 days, the organization told POLITICO’s Playbook on Thursday. The number of paid new members jumped from 4.1 million to 4.2 million during that time. – Katie Glueck

Leading HuffPo: Who's The One Waging War Now?
Mike Huckabee criticized President Obama on Wednesday for the lack of diversity in his Cabinet, accusing the president of waging his own “war on women” by not appointing more women to top administration posts. “Now a lot of those females who supported Barack Obama are scratching their heads, and they’re saying, ‘Whoa! How come there is so much testosterone in the Obama Cabinet and so little estrogen?’” the former Arkansas governor and one-time Republican presidential candidate said during his radio show. “Because if you look around, all of these high-powered appointments that he is making are all white guys."

Leading Politico: Expectations low for Biden, NRA talks
Vice President Joe Biden and the NRA are sitting down Thursday morning to talk gun control. Up next for a talk: Wal-Mart. But don’t be fooled that the high-profile meetings are going to get much done. – Anna Palmer and Reid J. Epstein

Leading The New York Times: Hagel Has Few Close Allies in Senate, Despite 12 Years There
For a man who spent 12 years in the Senate, Chuck Hagel will find himself with few close allies when the Armed Services Committee takes up his nomination to be secretary of defense this month. His three closest friends from his years as a Republican senator from Nebraska, 1997 to 2009, are either no longer members or in no position to help. One is the vice president, Joseph R. Biden Jr. Another, Richard G. Lugar of Indiana, limped out of the Capitol this month after being defeated for re-election in a Republican primary. – Jonathan Weisman and Jeff Zeleny

- Obama nominates Lew, jokes about his signature -
PRESIDENT BARACK OBAMA AT A WHITE HOUSE EVENT HONORING SECRETARY TIM GEITHNER AND NOMINATING HIS REPLACEMENT, JACK LEW…
Obama On Lew and Geithner: “This is bittersweet. Not only because Tim's leaving but also because Jack had been my chief of staff for the last year. He was my budget director before that. I trust his judgment, I value his friendship. I know very few people with greater integrity than the man to my left,” Obama said at the White House. “So, I don't want to see him go because it's working out really well for me to have him here in the White House. But my loss will be the nation's gain.”
Obama on Lew’s signature: “I had never noticed Jack's signature. And when this was highlighted yesterday in the press, I considered rescinding my offer to appoint him. Jack assures me that he is going to work to make at least one letter legible in order not to debase our currency should he be confirmed as secretary of the treasury.”

- Biden searches for ‘common ground’ in gun talks -
VICE PRESIDENT JOE BIDEN AT A MEETING WITH GUN LEGISLATION STAKEHOLDERS: “There's got to be some common ground here to, not solve every problem, but diminish the probability that what we've seen in these mass shootings will occur and diminish the probability that our children are at risk in their schools and diminish the probability that weapons will be used, firearms will be used in dealing with the aberrant behavior that takes place in our society. … I'm not sure we can guarantee this will never happen again but as the president said, even if what we do only saves one life, it makes sense and I think we can do a great deal without in any way imposing on or impinging on the rights that the Second Amendment guarantees.”

- Intriguing Opinion: Moderates are the new Independents -
CHARLIE COOK, EDITOR OF THE COOK POLITICAL REPORT, IN A COLUMN FOR NATIONAL JOURNAL: “For many years, I have been fixated on Independent voters as the political equivalent of the holy grail. But now I believe voters who describe themselves as moderates are certainly just as important—and perhaps more important—than those who call themselves Independents. … As we come out of the year-end fiscal-cliff crisis, there are other fights over the next three months that look equally challenging, if not more so. And the public-opinion fight is more likely to be won by whichever party seems to offer the message of balance that appeals to these moderate voters, who are obviously neither liberal nor conservative ideologues, and who are more pragmatic than dogmatic.”

- Ryan gets cheeky on 2016 -
REPUBLICAN REP. PAUL RYAN IN AN INTERVIEW WITH THE WISCONSIN STATE JOURNAL: “I've decided not to decide. … I have learned that whatever you do, you are going to get criticized. So you should do what you think is right.”

Amanda Terkel (@aterkel)
News of another school shooting comes out as Biden is talking about WH efforts to stop such shootings http://on.fb.me/U85TYC

Neil Irwin (@Neil_Irwin)
If he does nothing else, Tim Geithner will be one of the most consequential economic policymakers of our age. http://www.washingtonpost.com/blogs/wonkblog/wp/2013/01/10/tim-geithner-is-one-of-the-most-important-treasury-secretaries-in-history/

Rick Klein (@rickklein)
so Geithner was "sleepless," Solis "tireless," per the president. Wow, government service sounds awesome when you put it that way.

so Geithner was "sleepless," Solis "tireless," per the president. Wow, government service sounds awesome when you put it that way.

President Franklin Delano Roosevelt became the first president to travel abroad during war time when he visited the island of Trinidad, a British colony at the time, during World War II.

Roosevelt was on his way to the Casablanca Conference in Morocco – a 10-day meeting between the president, British Prime Minister Winston Churchill and General Charles de Gaulle of France. The conference was a ground breaking one; in Casablanca, the Allied powers agreed to the doctrine of “unconditional surrender,” meaning that all there would be fighting until the Axis powers were annihilated.

The trip was a long one for Roosevelt. On the way to the African nation, the president stopped in Trinidad, Brazil and Gambia – all of which were one night visits.

Congrats to Steve Liguori (@SteveL3877) who correctly answered Gut Check’s trivia question. Thanks for participating all.