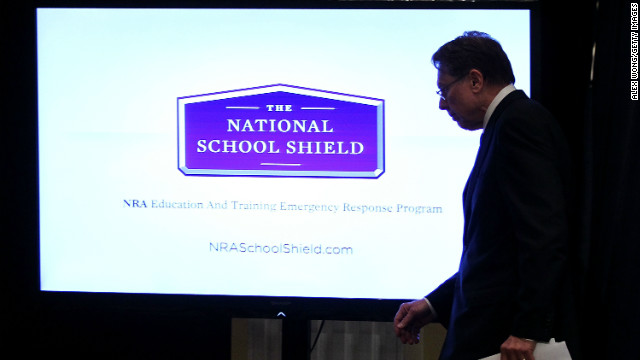 (CNN) - The nation’s largest gun lobby left a Thursday meeting with Vice President Joe Biden and his gun control panel “disappointed” and perceiving little ground for compromise and said it would move forward on the issue independently.

“In a sense, they were checking a box,” National Rifle Association President David Keene said on CNN’s “The Situation Room with Wolf Blitzer.” “They were able to say we've met with the NRA, we've met with the people that are strong Second Amendment supporters.”

His group issued a statement saying it was “disappointed with how little this meeting had to do with keeping our children safe and how much it had to do with an agenda to attack the Second Amendment.”

Representatives from the NRA and at least five other firearms associations joined Biden and Attorney General Eric Holder for an hour and a half long meeting on Thursday, White House officials said.

In the wake of the mass shooting that left 20 students and six adults dead at an elementary school in Newtown, Connecticut, President Barack Obama appointed Biden to head a panel on gun control and report back this month.

The NRA has proposed putting armed guards in "every single school in America that wants it," as well as considering best practices for training programs and school design.

It has steadfastly rejected compromise on outlawing certain weapons, types of weapons or accessories.

“We will not allow law-abiding gun owners to be blamed for the acts of criminals and madmen," the NRA statement read. "Instead, we will now take our commitment and meaningful contributions to members of Congress of both parties who are interested in having an honest conversation about what works - and what does not."

Were the president to propose a certain restriction on who could legally purchase firearms, Keene indicated his group would side with Obama.

“We have for years urged that those who have been adjudicated as potentially violently mentally ill ought to be included in the national database of those who are not allowed to buy firearms,” he said. “Twenty-three states don't do that.”

One group that said it was not invited to the Thursday meeting, Gun Owners of America, charged that the Obama administration is driven by an "antipathy to the Constitution and its disdain for the God-given right of self-defense that all gun owners enjoy."

Reporters were not allowed into any portion of the meeting, but earlier in the day, Biden said, "We realize this requires all the stakeholders to give us their best ideas to what is, as I said at the outset, a complicated problem. There is no single answer."

He said his group was meeting with a broad spectrum of organizations, including experts on health, education, and the law; leaders of religious and social communities; proponents of gun rights and gun control; and advocates against domestic violence.

"While claiming that no policy proposals would be 'prejudged,' this Task Force spent most of its time on proposed restrictions on lawful firearms owners - honest, taxpaying, hardworking Americans," their statement read. "It is unfortunate that this Administration continues to insist on pushing failed solutions to our nation's most pressing problems.”

About a week after the Newtown shooting, the NRA announced its proposal to put armed and trained guards in schools nationwide and unveiled a project called the National School Shield Emergency Response Program.

"The only way to stop a monster from killing our kids is to be personally involved and invested in a plan of absolute protection," the group's executive vice president, Wayne LaPierre, said in a statement to reporters. "The only thing that stops a bad guy with a gun is a good guy with a gun."

Biden said he would offer proposals to Obama next week and indicated Wednesday that there are both legislative action and "executive orders, executive action that can be taken" on the matter.