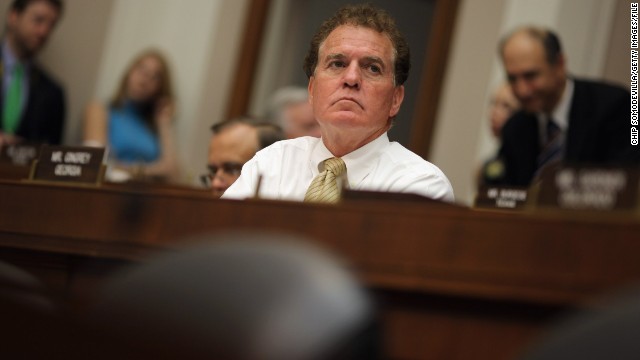 Appearing Thursday at a local Chamber of Commerce meeting in Smyrna, Ga., Gingrey took questions on abortion rights and a controversial Georgia law that bans abortions for women more than 20 weeks pregnant.

According to the Marietta Daily-Journal, Gingrey called "a little bit over the top" statements that derailed the Senate campaigns of Republicans Richard Mourdock and Rep. Todd Akin. Then he tried to analyze their underlying positions, ultimately saying Akin was "partly right."

"What [Akin] meant by legitimate rape was just look, someone can say I was raped: a scared-to-death 15-year-old that becomes impregnated by her boyfriend and then has to tell her parents, that's pretty tough and might on some occasion say, 'Hey, I was raped.' That's what he meant when he said legitimate rape versus non-legitimate rape," Gingrey said, according to the Daily-Journal.

"I don't find anything so horrible about that," he continued. "But then he went on and said that in a situation of rape, of a legitimate rape, a woman's body has a way of shutting down so the pregnancy would not occur. He's partly right on that."

Gingrey, an obstetrician-gynecologist, has served in the House since 2002 and chairs the GOP Doctors Caucus.

As the comments began spreading Friday morning, the congressman's office released this statement: "At a breakfast yesterday morning, I was asked why Democrats made abortion a central theme of the presidential campaign. I do not defend, nor do I stand by, the remarks made by Rep. Akin and Mr. Mourdock. In my attempt to provide context as to what I presumed they meant, my position was misconstrued."

Once leading in the polls, former Rep. Akin and Richard Mourdock both lost their Senate races to Democrats last November after their comments on pregnancy and rape were widely circulated.

When asked on a local news show what he thought about abortion in the case of rape, Akin sparked the controversy when he said, "First of all, from what I understand from doctors, that's really rare. If it's a legitimate rape, the female body has ways to try to shut that whole thing down."

Mourdock was participating in a televised debate against then-Rep. Joe Donnelly and libertarian Andrew Horning when he said, "Life is that gift from God that I think even if life begins in that horrible situation of rape, that it is something that God intended to happen."

The Democratic Congressional Campaign Committee seized on Gingrey's comments in a press release Friday afternoon, calling them "the latest in a long line of Republicans to expose their party's extreme, offensive, and medically ignorant views about rape."

"That the Chairman of the Republican Doctors Caucus shares former Congressman Todd Akin's extreme, offensive views on women and rape is both alarming and telling," said Jesse Ferguson, DCCC communications director. "Last November women across the country sent the message loud and clear that they are not interested in electing men who don't take women's health and safety seriously, but House Republicans have apparently still not gotten that message."