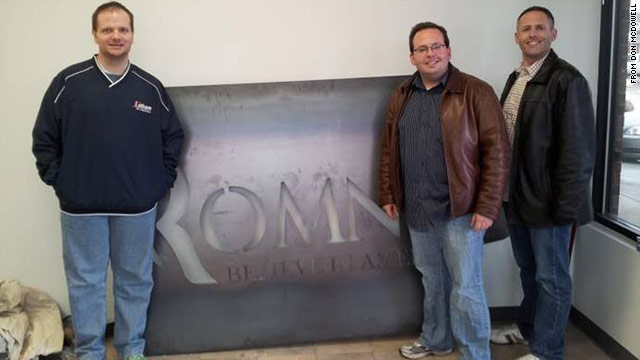 (CNN) - For the political junkie, these 300 pounds of steel are anything but junk.

So when Don McDowell, a 27-year-old Iowa Republican who collects campaign memorabilia, heard the huge metal plate in the shape of Iowa with Mitt Romney's campaign logo engraved in it was up for grabs, he rented a truck, rounded up his buddies and claimed the 8-foot-wide, 5-foot-high sign.

The sign had hung behind Romney at a 2011 campaign rally in Dubuque and eventually came to rest in the GOP presidential contender's Des Moines campaign office.

But with the Iowa Caucuses – held January 3, 2012 – and the whole election in the rearview mirror, the sign was free for whoever could haul it away. It had been left, abandoned, in the old campaign office and had to go before a new tenant moved in.

"I saw it on Craigslist and originally there was the story earlier this week" in local media, McDowell told CNN. The Des Moines Register first reported the story.

He had a truck, the hands – "including my Obama-supporting Democrat brother" – and the interest in adding it to his collection. The rental and a few bucks for his friends came to about $100.

The sign, which is "a bit rough on the sides," is now the largest and heaviest item in his collection of political memorabilia from campaigns past.

"I've been going to political events since about the time I could walk so I've got signs, buttons and things from the caucuses and the straw poll," he said. Among the highlights of his collection prior to the Romney sign was a "mini-statue of Jimmy Carter holding a peanut."

McDowell said he attended a number of campaign events this year, including Romney's rally in the state on the eve of the caucuses, but he was volunteering with the state party and could not attend a caucus.

"I would have given him some strong consideration," McDowell said.

Come 2016, he has his eye on a number of potential candidates, including Sen. Marco Rubio of Florida, Rep. Paul Ryan of Wisconsin, Gov. Chris Christie of New Jersey, former Florida Gov. Jeb Bush and Gov. Susana Martinez of New Mexico. "I'm waiting to see if there's a dark horse out there," he said.

For now, it is sitting in his garage while he figures out where it will go next. Maybe it will have a place in a museum someday, he wondered, or his personal collection, once he gets established and has somewhere to show it.

"I'm sure had Romney won, the campaign would have taken it with them and used it in four years for his reelection campaign," McDowell said. "Nobody wanted to lug this thing around."