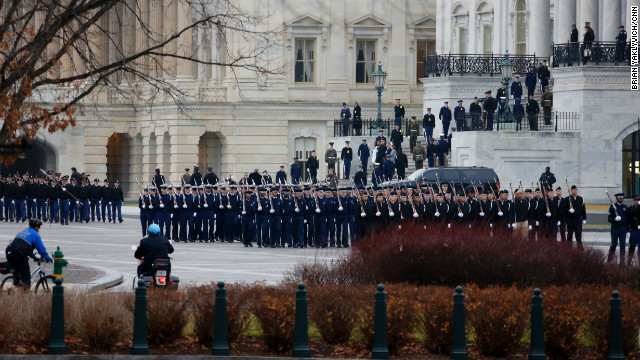 (CNN) - "Practice makes perfect," or so the saying goes, and it was practice time in Washington on Sunday, one week ahead of Inauguration Day.

Hundreds of band members, military personnel, media and law enforcement took part in an exercise to rehearse both the swearing-in ceremony and the parade down Pennsylvania Avenue, scheduled to take place a week from Monday, helping to make sure they get the real thing right.

The practice swearing-in ceremony took place in what would be real time – but eight days off - complete with stand-ins filling in for the actual participants, including both Barack and Michelle Obama.

Inauguration Day is January 20. Obama will take the oath of office that day at the White House to begin his second term, since the date falls on a Sunday. The bigger, ceremonial swearing-in and inaugural address will take place the next day at the Capitol.

This year's inauguration figures to be a little different from the one four years ago. For starters, officials are expecting around half as many people as in 2009, when a record 1.8 million attended.

Barbara Lang, president and CEO of the DC Chamber of Commerce, said business leaders would love to see almost 2 million people again this year, but the expected lower attendance is at least good news for those who are looking for a place to stay.

"We are told that the hotels are not sold out. So that's very different than it was four years ago. So there's still availability in all of the major hotels around the city," Lang said.

Lang also gave a few tips for those coming into Washington for the big event: Wear comfortable shoes, bring maps and try to avoid bringing backpacks, as security personnel will have a long list of prohibited items.

Most importantly though, Lang said, "Just really enjoy the moment. This is a terrific city. Obviously, I am the cheerleader in chief, but it is a wonderful city, and we want people to come here and enjoy themselves. Spend a lot of money and come back often."

As for practicing, there's no word on whether Obama or Chief Justice John Roberts is rehearsing the oath of office this time around. The pair notably flubbed the recitation in front of millions during Obama's first inauguration.