Washington (CNN) - President Barack Obama held the seventeenth solo news conference of his presidency Monday at the White House - his second since being re-elected to a second term in November. His opening statement - and the bulk of the news conference - focused on the debt limit, which is poised to become the next battle between the White House and Congress.

Other topics: the ongoing debate over gun control and the recent uproar over a lack of women in his second term cabinet.

“The American people do not support raising the debt ceiling without reducing government spending at the same time. The consequences of failing to increase the debt ceiling are real, but so too are the consequences of allowing our spending problem to go unresolved. Without meaningful action, the debt will continue to act as an anchor on our economy, costing American jobs and endangering our children’s future. The House will do its job and pass responsible legislation that controls spending, meets our nation’s obligations and keeps the government running, and we will insist that the Democratic majority in Washington do the same.”

12:30 p.m. ET - The president pushed back on criticism he does not socialize enough with members of Congress, saying the opposition to his ideas in Congress is unrelated his relationship with elected officials.

He said those in Washington often do not accept invitations to meet with him because of the "optics." But now that his daughters are getting older and "don't want to spend that much time with me anyway," he said he may meet with players in Washington more often.

12:28 p.m. ET - Listen to Obama explain his aversion to socializing in Washington in this interview with CNN chief White House Correspondent Jessica Yellin, taped in August.

12:27 p.m. ET - The president said his first term cabinet was the most diverse in history and that he expects "that record will be built upon." He pointed to high profile women in his administration that led the state department, his health care overhaul push and his department of Homeland Security. Additionally, he said 50% of his White House staff are women.

12:24 p.m. ET - Final question is on a pair of criticisms of Obama: one is that his team is too insular, and doesn't socialize with political rivals. The second is on diversity within his cabinet, which recently came under scrutiny after Obama nominated three white men to top cabinet posts.

“The President and his allies need to get serious about spending, and the debt-limit debate is the perfect time for it."

“I do know that the most important issue confronting the future of our country is our deficit and debt. So we are hoping for a new seriousness on the part of the President with regard to the single biggest issue confronting the country and we look forward to working with him to do something about this huge, huge problem.”

12:20 p.m. ET - Obama predicted there are enough votes in the House of Representatives to allow a government shutdown, something he called a "mistake" that would "profoundly damage our economy."

"They're elected representatives," the president said of House members. "Folks put them into those positions."

But he said the American people would likely "blame all of Washington" if that were to happen.

12:15 p.m. ET - Obama called on Washington to "break the habit of negotiating through crisis over and over again." The start of his second term is a good time to stop that cycle, he said. 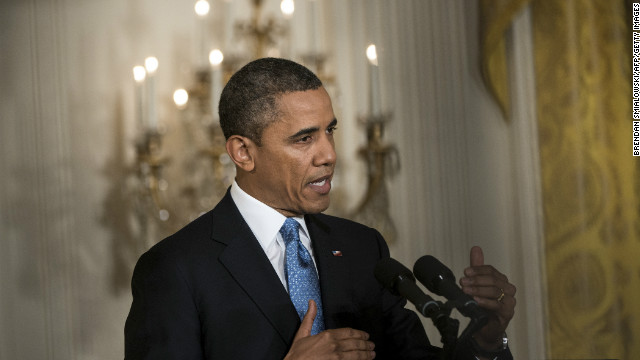 Another view of Obama's news conference, from AFP/Getty Images.

12:11 p.m. ET - Fifth question is back to the debt ceiling: Why should House Republicans take your vow not to negotiate on the debt limit seriously if you made a similar vow in the past, and then engaged in negotiations?

12:10 p.m. ET - The president said lines to purchase guns are increasing because of "fear that's fanned by those who are worried about the possibility of legislation getting out there."

12:09 p.m. ET - Obama said he is confident there are steps he can take as chief executive to address gun violence that would not require legislation. He specifically referenced tracking weapons and gathering data on guns that have "fallen into the hands of criminals." 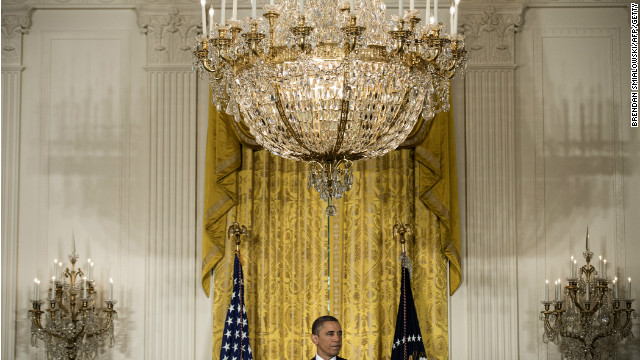 A view of Obama at today's press conference, from AFP/Getty Images.

12:07 p.m. ET - Fourth question goes back to gun control: What measures are you willing to take executive action on in regards to gun control? And what do you make of long lines at gun shops and gun shows as the gun control debate heats up?

12:05 p.m. ET - Obama said the U.S. will not be put in a position, in order to pay for spending already incurred, to "hurt the economy and middle class families" or "blow up the economy."

"We're not going to do that," the president said.

12:01 p.m. ET - Third question is also on the debt ceiling - if no one is talking to each other on how to raise the debt limit, then is it likely that the U.S. will default?

11:58 a.m. ET - The cuts needed to address the debt and deficit would not be possible, the president said, without cuts to Medicare and changes to Medicaid or changes in defenses spending, steps to which Obama said Republicans will not agree.

11:57 a.m. ET - Have a question on the debt ceiling? Read a comprehensive FAQ from CNNMoney here.

11:56 a.m. ET - The president again accused Republicans in the House and Senate with risking the full faith and credit of the United States.

That "is not what the founders intended and most Americans think Democracy should work," Obama said.

11:54 a.m. ET - Obama said he would accept the responsibility of raising the debt limit if Congress "gives me the autority." However, if they want to retain control of that responsibility, "then they need to go ahead and it get it done."

"There are no magic tricks," the president added. "We are not a dead beat nation."

11:53 a.m. ET - Second question goes back to the debt ceiling debate - are you considering a plan B to raise the debt limit?

11:52 a.m. ET - Obama mentioned stronger background checks for gun owners, limits on high capacity magazine clips and an assault weapons ban as options that are on the table to address gun violence.

"Will all of them get through Congress," Obama asked. "I don't know."

11:50 a.m. ET - For the latest on where the gun control debate stands, read this piece from CNN's Michael Pearson.

11:48 a.m. ET –Obama thanked Vice President Joe Biden for his work on "issues of gun violence" and said he will meet with Biden and review his proposals Monday. He said there will be a fuller presentation later in the week.

11:48 a.m. ET - First question to Obama is on gun violence. He's asked what gun control measures he'll pursue, keeping in mind any measure would need to garner Republican support in a divided Congress.

11:47 a.m. ET - If the United States does not raise the debt ceiling ahead of the impending deadline, there will be a "self inflicted wound to our economy" that could tip the country into a recession, the president said. He referenced the Social Security checks that would not go out and potential hits to veterans benefits, troop pay and contracts with small business owners.

11:46 a.m. ET - "America cannot afford another debate with this Congress about whether they should pay bills they have already racked up," Obama said in urging lawmakers to authorize an increase in the nation's debt ceiling.

"They (the American people) want us to get our books in order in a balanced way," he said.

11:39 a.m. ET - Obama opened what is likely the last press conference of his first term in office describing his first four years as "busy and productive" and promising to carry out the agenda on which he campaigned during his second term in office, which he said includes shrinking deficits.

11:39 p.m. ET - Obama tells reporters that the American economy will have a good year, as long as politics in Washington don't interfere.

11:38 a.m. ET - Obama begins by saying it "might make sense to take some questions today as my first term comes to an end."

11:37 a.m. ET - The White House gives a two-minute warning for the beginning of the news conference.

11:33 a.m. ET - Another question to expect today - Why haven't more women been appointed to the president's second term cabinet? Thus far, Obama's nominees have including Sen. John Kerry for secretary of state, Chuck Hagel for secretary of defense, and Jack Lew for secretary of treasury - all white men.

House Republican leaders appear more willing then before to allow the country to default on its loans and shut the government down, in order to force the president and Democrats to agree to spending cuts.

In conversations with House GOP leadership aides, it was clear they want to try to reclaim the upper hand in this debate over slashing government spending.

"If the White House continues to pretend that hoping is a strategy then I don't see how we make progress," said one House GOP leadership aide.

11:24 a.m. ET - One topic likely to arise during today's news conference: gun control. Listen to what NRA President David Keene said on the subject this Sunday on CNN's "State of the Union."

The country's borrowing has actually already passed its legal limit – currently $16.394 trillion. As a result, the Treasury can't borrow any more money in the markets, so it has begun to use "extraordinary measures" to ensure that the government can continue to pay all its bills in full and on time. But those measures can only buy about two months' grace.

If the ceiling isn't raised by late February or early March, the United States runs the risk of defaulting on its obligations, because the Treasury would no longer have enough money available to pay all the country's bills.