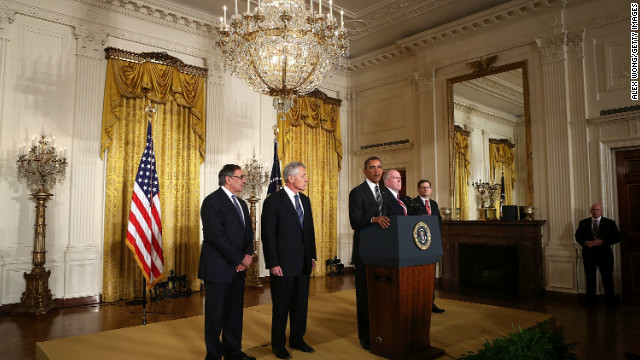 That was President Barack Obama's response Monday to critics who have questioned why his second-term cabinet nominees have all been white males.

"I would just suggest that everybody kind of wait until they've seen all my appointments, who is in the White House staff and who is in my cabinet, before they rush to judgment," Obama said during his Monday news conference, which focused mostly on the upcoming debate over raising the federal debt limit.

Since winning re-election in November, Obama has made four high-profile nominations for posts in his cabinet, including tapping Sen. John Kerry for secretary of state. If confirmed, he'll replace Hillary Clinton, the highest profile woman in Obama's administration.

Obama was originally said to be considering U.S. Ambassador to the United Nations Susan Rice for the post at State, but continued questions over her statements following the terror attack at an American diplomatic post in Benghazi, Libya, caused her to withdraw her name from consideration.

Obama pointed to Clinton Monday as an example of a high-profile member of his team who is a woman, though he didn't mention her by name.

"If you think about my first four years, the person who probably had the most influence on my foreign policy was a woman," the president said, adding later that "one woman, admittedly a high profile one, is leaving the administration - has already left the administration - and I have made a replacement."

The three other prominent cabinet positions with second-term openings – secretary of defense, secretary of the treasury, and CIA director - were previously held by white men. Former Sen. Chuck Hagel, White House Chief of Staff Jack Lew, and chief counterterrorism adviser John Brennan have been tapped for those posts, respectively.

While Obama's record of appointing women to top posts doesn't differ significantly from former President George W. Bush, many take the issue with Obama's appointments since he ran as a champion of women's issues during both of his presidential election campaigns, unlike his predecessor.

In the 2012 campaign, he mocked his rival Mitt Romney for saying that as governor of Massachusetts he relied on "binders full of women" to find qualified females for government posts.

"I've got to tell you, we don't have to collect a bunch of binders to find qualified, talented, driven young women," Obama said at a campaign rally the day after Romney made the remark at a presidential debate.

While his second-term nominees thus far have all been white men, many of his top advisers in the White House are women, including Valerie Jarrett, arguably his most trusted aide.

Though men's names have been but forward to take the top cabinet posts, other spots at the departments of transportation, commerce and labor remain to be filled. Obama will also need to choose a new chief of staff and administrator of the Environmental Protection Agency.

The president also confronted a question about his attitude toward socializing with lawmakers in Washington, which he has done little of since entering office in 2009. Some critics attribute the near-constant stalemate between the White House and Congress with Obama's unwillingness to get to know Republican lawmakers personally.

"Most people who know me know I'm a pretty friendly guy, and I like a good party," Obama said, reminding his audience that a round of golf in 2011 with GOP House Speaker John Boehner didn't end in a grand bargain on reducing the federal debt.

Ultimately, Republicans on Capitol Hill wouldn't want to publically mingle with the president since it could hurt them politically, Obama said.

"I think there are a lot of Republicans at this point that feel that given how much energy has been devoted in some of the media that's preferred by Republican constituencies to demonize me, that it doesn't look real good socializing with me," he said, singling out former Florida Gov. Charlie Crist as an example. Crist, a Republican, supported Obama's stimulus plan in 2009 to the chagrin of some in his party. Last year Crist officially became a Democrat.