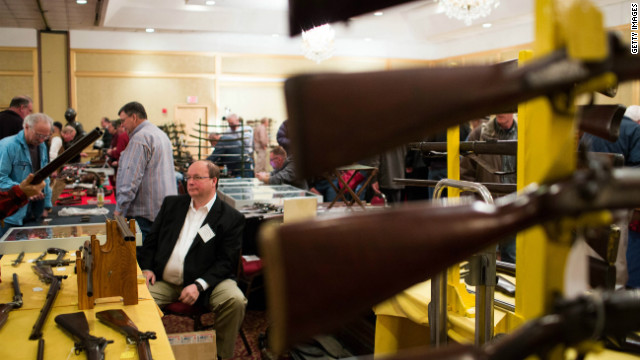 Washington (CNN) - One month after the deadly shootings at an elementary school in Connecticut, a new national poll indicates that a majority of Americans support a number of gun control proposals. But the survey points to wide partisan, gender, and educational divides over some proposals.

According to a Pew Research Center poll, 85% of the public backs making private gun sales and purchases at gun shows subject to background checks, with comparable support across party lines. And the poll indicates that 80% favor laws to prevent mentally ill people from purchasing guns, with broad support from Democrats, Republicans and independent voters.

The poll's Monday release comes one month after 27 people, including 20 children at Sandy Hook Elementary School, were killed in Newtown, Connecticut by a gunman, who then shot himself to death.

Two-thirds of people questioned in the survey say they support creating a federal database to track gun sales, but there's a partisan divide, with 84% of Democrats and only 49% of Republicans favoring the proposal.

Fifty-five percent favor a ban on assault style weapons, 54% back a ban on high capacity ammunition clips, and 53% support a ban on on-line ammunition sales, but again there's a wide partisan divide between Democrats and Republicans on these proposals.

According to the poll, nearly two-thirds support putting armed security guards or police in more schools, but only four in ten say arming more teachers and school officials with guns is a good idea.

By a 51%-45% margin, Americans say it's more important to control gun ownership than to protect gun rights. This is virtually unchanged from Pew poll that was conducted in the days following the Newtown, Connecticut shootings.

Men are divided on this question, while a solid majority of women say it's more important to control gun ownership. There's also a sizable gender gap over a ban on semi-automatic weapons, with two-thirds of women supporting such a move and men divided.

The survey also highlights an educational divide. Fewer than half of college graduates support a proposal to put armed guards or police in more schools, while three-quarters of those with no more than a high school education favor the idea.

The Pew Research Center poll was conducted January 9-13, with 1,502 adults nationwide questioned by telephone. The survey's overall sampling error is plus or minus 2.9 percentage points.