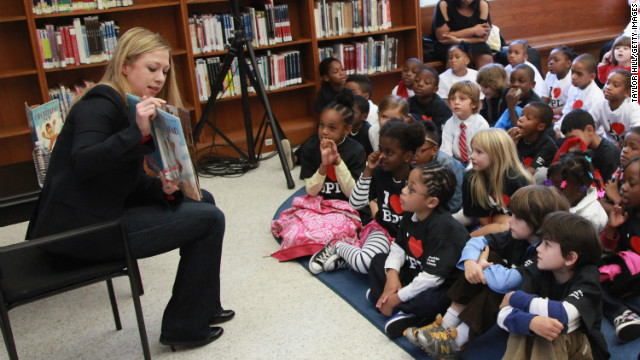 DEVELOPING: WHITE HOUSE GUN ANNOUNCEMENT TO COME WEDNESDAY… President Barack Obama will announce “concrete” proposals to prevent gun violence at 11:45 a.m. Wednesday. He will be joined by Vice President Joe Biden. ANNOUNCEMENT LIKELY WILL INCLUDE EXECUTIVE ACTIONS: Gun control proposals put together by Vice President Joe Biden include as many as 19 executive actions that President Barack Obama could take without congressional approval, such as tougher enforcement of existing laws, legislators briefed by Biden said Tuesday. The president could demand that agencies provide data for background checks that are supposed to accompany gun sales, ensuring that information included in the checks is as "comprehensive and complete as possible," Democratic Rep. Mike Thompson of California told CNN. – Dana Bash, Jessica Yellin and Tom Cohen

TRAIL TRIVIA
(Answer below)
On this day in history, the state that would become Vermont declared independence from England. What was the area called at the time?

As the media focuses on Secretary of State Hillary Clinton’s exit from public service and the surprise appearance of former President Bill Clinton at the Golden Globes, it is their daughter, Chelsea, who caught our eye. The normally media shy daughter of the most famous political couple in the world has taken a bigger public profile - albeit methodically. First, she joined NBC News as a special correspondent, giving her broadcast visibility, then she granted a rare personal interview for the coveted September Vogue, and now she is inching even closer to politics as the “Honorary Chair for the National Day of Service” which is part of Obama's inauguration weekend.

In conjunction with this role, Chelsea penned an op-ed for CNN.com, entitled “We can make a difference.” She writes:
“When I was growing up, my parents and grandparents taught me that engaging in service, helping our neighbors and building strong communities are all part of being a good citizen and a good person. … In Little Rock, Arkansas, we went to church on Sundays, and afterward, conversation often turned to what volunteer project we could do together. Favorites were deciding which books to donate to the church or library and cleaning up parks together, something my father always managed to turn into a game.

“Nineteen years ago, my father proudly signed the bill making Martin Luther King Day a time dedicated to serving others. At the speech he gave to mark the event, he reminded us of what King once called, "Life's most persistent and urgent question: What are you doing for others?"

“There are countless right answers to that question - the only wrong one is to do nothing. …

“I hope you can join me, the first family and our entire American family this Saturday as we make this country that we love even better.”

Inaugurations are about transitions, and as one Clinton exits the public service spotlight, we will keep our eye on the next generation.

Leading CNNPolitics: Is Weiner preparing for a mayoral bid?
Could former Rep. Anthony Weiner be preparing for a political comeback? The Democrat's latest filing with the New York City Campaign Finance Board, published Tuesday, may send some subtle messages. His mayoral campaign committee, created ahead of his unsuccessful bid for the Democratic nomination in 2005, reported spending just one dollar shy of $37,000 in the last six months. It brought in $27,400 in the same period, largely through a transfer from a previous political committee. – Gregory Wallace

Leading Drudge: Congressman warns Obama of impeachment
Texas Republican Rep. Steve Stockman threatened Monday afternoon that he would file articles of impeachment against President Barack Obama if he institutes gun control measures with an executive order. Stockman warned that such executive orders would be “unconstitutional” and “infringe on our constitutionally-protected right to keep and bear arms.” – Caroline May for the Daily Caller

Leading HuffPo: Newt Gingrich: For House GOP, debt ceiling is a 'Threat They Can't Sustain'
Former House Speaker Newt Gingrich says House Republicans are making a mistake by using the issue of increasing the borrowing limit to challenge President Barack Obama on spending issues. Gingrich tells "CBS This Morning" that's a losing proposition. "In the end, it's a threat they can't sustain," he says, because no one wants to see the country default on its debts. The former Georgia congressman also says Republicans have two "much better arenas" for a fight, including a stopgap spending bill and a budget sequester.

Leading Politico: Debt debate: No easy path to avoid chaos
If you thought the fiscal cliff was bad, just wait for the triple threat. The White House and Congress are facing three critical deadlines — the country hits its debt limit as early as mid-February, $1.2 trillion in automatic spending cuts take effect March 2, and the government runs out of money to fund operations later that month. There is no real optimism among Republicans and Democrats that the standoff will end quickly, or painlessly. The strategy of each party rests largely on the other one folding. – Carrie Budoff Brown and Jake Sherman

Leading The New York Times: Obama Willing to Use Executive Orders on Guns
President Obama this week will embrace a comprehensive plan to reduce gun violence that will call for major legislation to expand background checks for gun purchases and lay out 19 separate actions the president could take by invoking the power of his office, lawmakers who were briefed on the plan said Monday. Lawmakers and other officials said that the president could use a public event as soon as Wednesday to signal his intention to engage in the biggest Congressional fight over guns in nearly two decades, focusing on the heightened background checks and including efforts to ban assault weapons and their high-capacity clips. But given the difficulty of pushing new rules through a bitterly divided Congress, Mr. Obama will also promise to act on his own to reduce gun violence wherever possible. – Michael D. Shear and Jennifer Steinhauer

- Two key senators support Hagel, despite comments about Israel -
SEN. CHUCK SCHUMER OF NEW YORK: “In a meeting Monday, Senator Hagel spent approximately 90 minutes addressing my concerns one by one. It was a very constructive session. Senator Hagel could not have been more forthcoming and sincere. Based on several key assurances provided by Senator Hagel, I am currently prepared to vote for his confirmation. I encourage my Senate colleagues who have shared my previous concerns to also support him.”
SEN. BARBARA BOXER OF CALIFORNIA: “After speaking extensively with Senator Hagel by phone last week and after receiving a detailed written response to my questions late today, I will support Senator Hagel’s nomination as Secretary of Defense. … I asked him about a number of issues – including America’s special relationship with Israel, the threats posed by Iran to the world and the treatment of women and gay and lesbian members of our military – and his answers were reassuring and show a sensitivity and understanding of these issues.”

Gut Check Full Service: Buried in Schumer’s statement, the senator says Israel is worse off than it was five years ago… “I know some will question whether Senator Hagel’s assurances are merely attempts to quiet critics as he seeks confirmation to this critical post. But I don’t think so. Senator Hagel realizes the situation in the Middle East has changed, with Israel in a dramatically more endangered position than it was even five years ago. His views are genuine, and reflect this new reality.”

- Obama’s possible use of executive actions on guns is illegal, says Rush -
RUSH LIMBAUGH ON HIS NATIONALLY SYNDICATED RADIO SHOW: “Nineteen proposals to try to limit the availability of guns. Nineteen proposals to get around the Second Amendment. Many of these 19 proposals will come via executive order - and if they do, they will be illegal. Executive orders are not intended to be used this way. Executive orders do not grant the president the power to break the law. Executive orders do not grant the president the power to get around or violate the Constitution. … This is not the way you amend the Constitution. If it were this easy... Do you realize how easy it would be for them to just pass a law eliminating free speech, which they've done! How do you think Obama was able to tell the Catholic Church that they have no religious freedom when it's guaranteed to them in the First Amendment? Obama, with an executive order, essentially granted amnesty to a million children of illegal immigrants. That's not what the executive order is for, but he used it that way.”

- The resurgence of birthers? -
CONAN O’BRIEN ON HIS LATE NIGHT COMEDY SHOW: “President Obama's half-brother is running for political office in Kenya. Yeah. Donald Trump has already accused him of being born in the United States.”

Catherine Rampell (@crampell)
Wal-Mart plans to hire every veteran who wants a job and left military in previous year http://nyti.ms/WHhTi2

Abby Livingston (@RollCallAbby)
In which @amyewalter is called "an assassin" and a senator taunts pregnant women: http://www.rollcall.com/news/swearing_in_is_akin_to_draft_day_for_rivals-220721-1.html?pos=oathh

Ed O'Keefe (@edatpost)
Which West Virginia Democrats might run for Senate now that Jay Rockfeller is retiring? @fixsean has a good list http://wapo.st/SEcT2z

On January 15, 1777, politicians from New Hampshire voted to give a small piece of territory to their west – the area we now know as Vermont – – its independence. For the first six months of its existence, the area was known as New Connecticut.

It wasn’t until June 1777 that delegates from the state of New Connecticut voted to adopt the name of Vermont. The name is derived from two French words – “vert,” which means green and “mont,” which means mountain. Thus, Vermont means Green Mountain – a direct reference to a mountain range that runs throughout the state.

When the state voted to change its name, it also began the process of ratifying a constitution, a process that was completed on July 8, 1777. This document was among the first written constitutions in North America and was also considered incredibly progressive – it abolished slavery, allowed all men to vote and instituted public schools for all residents.