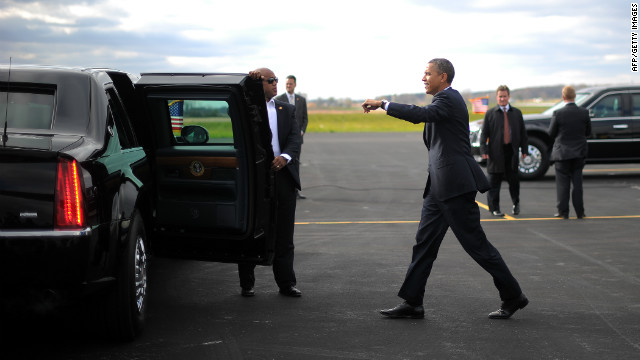 Obama limo to roll with 'Taxation Without Representation' plates

(CNN) - In a sign of solidarity, President Barack Obama will begin using the standard license plate for the District of Columbia, which famously states "Taxation Without Representation," on presidential vehicles, a White House official confirmed Tuesday.

The move comes after the city council for Washington, D.C. petitioned the president last week through a resolution, demanding that Obama use the license plates as millions watch his presidential motorcade drive down Pennsylvania Avenue for his inauguration on Monday.

"President Obama has lived in the District now for four years, and has seen first-hand how patently unfair it is for working families in D.C. to work hard, raise children and pay taxes, without having a vote in Congress," the White House official said in a statement.

While Washington, D.C., with a population of 617,996 people, elects a delegate to the U.S. House of Representatives–currently Rep. Eleanor Holmes Norton–the delegate does not have voting privileges on the House floor. The delegate, however, is permitted to debate and vote in committees on which he or she serves.

The Virgin Islands, Guam, and American Samoa are also represented by a delegate, while Puerto Rico has a resident commissioner in Congress.

The district's Department of Motor Vehicles began placing the slogan, "Taxation Without Representation," on license plates nearly 13 years ago a sign of protest to the federal rules.

Presidential vehicles will start using the plates this weekend, the official added, and will continue to display them throughout the president's second term as a way to demonstrate Obama's "commitment to the principle of full representation for the people of the District of Columbia."

"It is about time," said Mark Plotkin, a veteran political analyst in Washington who's widely credited with proposing the slogan. When Plotkin hosted a radio show on WAMU, a listener tipped him off to the idea right before President Bill Clinton's second term, he said.

A few years later, the district began issuing the plates in 2000 and Clinton attached one to his presidential limousine. President George W. Bush removed the phrase from his tag, a practice that Obama continued until now.

Calling it a "glaring contradiction and hypocrisy" on Obama's part, Plotkin said the president may be "on his way to remedying this."

"It has taken four years," he continued. "But I am very pleased and I hope, just maybe, the president will have the zeal of a convert and push democracy here where he lives, just like he pushes it everywhere else."

But some say there's more to be done than simply tacking on the plates. Marion Barry, the district's former mayor who now serves on the city council, pointed to the overwhelming number of Washington voters who turned out for Obama in both elections.

He said the city is working to get a statehood bill put together in the House and the Senate, and argued it would be "helpful" for the president to support the legislation.

"I don't want people to get carried away with just the license. That is just the beginning," he said. "We can't let up."