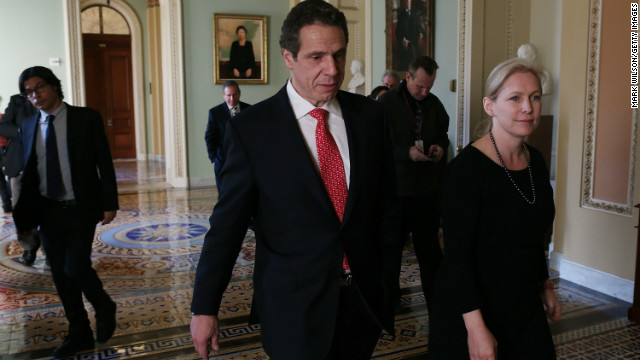 Poll: New Yorkers like Cuomo and his gun plan

(CNN) – The stringent gun laws pushed by New York Gov. Andrew Cuomo and passed by the state legislature this week are viewed favorably by large majorities of voters in the state, a Siena College poll released Thursday indicated.

Those measures include a ban on assault weapons and high capacity magazines, which 73% of New York voters support. Ninety-one percent approve of increasing penalties for purchasing illegal guns and using guns on school grounds.

The poll was conducted both before and after Cuomo first made his gun proposals public. Also included in the package was a measure strengthening rules governing the mentally ill, including a requirement to report potentially harmful behavior. The new laws were signed into law on Tuesday.

Overall, Cuomo enjoys a strong approval rating among voters in New York – 60% approve of his job performance, compared to 38% who disapprove. An even higher number of voters – 71% - view Cuomo favorably.

That's good news for the first term governor, who is considered a potential candidate for the 2016 Democratic presidential nomination. His approval and favorability numbers are largely unchanged since the last time Siena College polled New Yorkers.

"A new year and the same old, same old when it comes to how voters feel about the Governor," Siena pollster Steven Greenberg said. "He continues to be viewed favorably by more than 70 percent of voters, including 58 percent of Republicans, and he continues to have a 60 percent excellent/good job performance rating."

"With nearly two years until the next time Cuomo will face the voters, 60 percent of voters are prepared to re-elect him, compared to 32 percent who would prefer 'someone else,'" he continued.

The Siena poll was conducted by telephone between January 10-15 from 676 registered New York voters. The sampling error was plus or minus 3.8 percentage points.