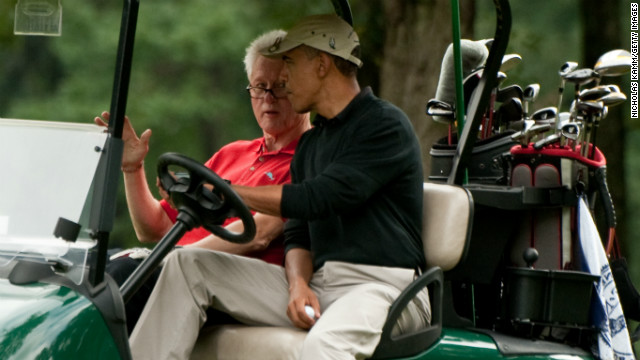 Why did Obama quit a golf game with Clinton?

(CNN) - President Bill Clinton says President Barack Obama quit a recent golf round between them - and he suggested he might have a theory why.

"We played thirteen holes at Andrews Air Force Base the other day," Clinton said, "before he had to leave as a result of being reelected and getting ready for the inauguration, the legislature coming in and everything - the Congress coming in."

"He had the lowest score by far he'd ever shot at Andrews," Clinton, speaking at an event in California, continued of Obama. "He was five shots ahead of me after nine holes - but I'm older. I start slow and pick up, so I picked up four of those strokes in the first three holes of the back nine."

That left him within striking distance when Obama pulled his move.

"I'm only one down and he leaves at (hole) thirteen - says, 'Gotta go,' " Clinton continued, laughing.

He stopped short of accusing Obama of quitting the game before chalking up a loss, but said he told Obama, "Hey, you're talking to somebody that's had this job and made that excuse."

They hit the links together on December 2, according to White House officials' accounting of Obama's golfing partners provided to pool reporters. That day U.S. Trade Representative Ron Kirk and Virginia gubernatorial candidate Terry McAuliffe rounded out the foursome.

Obama was at the course just under four hours that day. He has been known to spend longer; his latest golf outing, on January 4, lasted six hours.

Clinton spoke in Palm Springs, California at an event associated with the Humana Challenge golf tournament, whose sponsors include the Humana health care company and his Clinton Foundation.

The former president took questions on golf and health care from reporters and said there is a realization that "we can't keep spending more of our income on health care."

It is an argument for Obama's health reform law, he said.

"I think that in the next four years, how this health care bill is implemented will determine whether people see it as I do: as a big step forward - assuming we implement it right - or whether they have their fears confirmed because they don't like the way it's implemented and they think it's more trouble and less good," Clinton said.

His advocacy for the law and Obama was motivated "because I thought it was the right thing to do. And I told him (Obama) when it was over - I said, 'Nobody owes me anything. I'm going back to do my foundation. If I can ever help you, call me, and if you don't, it’s fine with me.'

"I did this because it was right - end of story," Clinton added.

Clinton had no staunch position on one of the latest controversy in golf: the practice of “anchoring” putting clubs, which will be banned from the sport starting in 2016. Anchoring the putter grip in one's belly may give players an advantage, supporters of the rule change say, because it aids players' control of the club on critical shots. Opponents say an anchored club is not swung in the spirit of the game.

"I actually am one of those guys that ought to benefit from it because I have a condition that sometimes you get with aging," Clinton said. "You make have noticed it; my hand has a little tremor when I'm tired and a lot of people do when they're older. The first time it happened, I had to go get myself checked to make sure I didn't have Parkinson’s (disease) and I was so relieved (with a negative diagnosis) I didn't care how much it shook after that.

"But I've never been able to figure out how to use one of those things so I don't care."