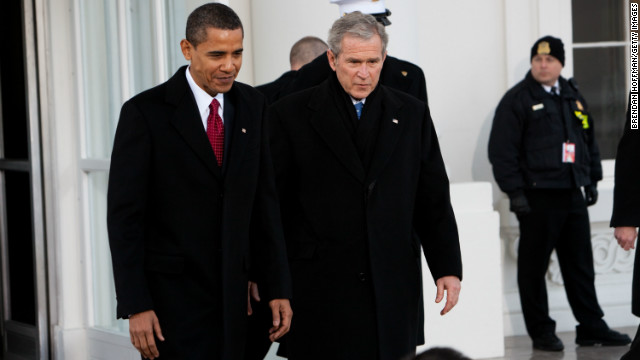 Both attended Obama's first inauguration in 2009, when the younger Bush's second term ended. Former presidents often attend inaugurations and have prominent seats alongside legislators, Supreme Court justices and other dignitaries.

This will be the first inauguration that the elder Bush has missed since 1997, according to spokesman Jim McGrath. That year, former President Bill Clinton was sworn in for his second term.

The elder Bush was released on Monday from a Houston hospital, where he had spent more than a month after being admitted with bronchitis. He spent a week in intensive care as doctors treated a fever.

His doctor said Bush would continue to receive physical therapy as an outpatient. At age 88, he is the oldest living president and is four months older than former President Jimmy Carter.

Freddy Ford, a spokesman for the younger Bush, told CNN, "President and Mrs. Bush wish President Obama and his family all the best for a wonderful inaugural weekend." Ford did not say why Bush would not attend.

Obama will take the oath of office for his second term at noon Sunday, as is constitutionally required, at the White House. The ceremony at the Capitol will be held on Monday.