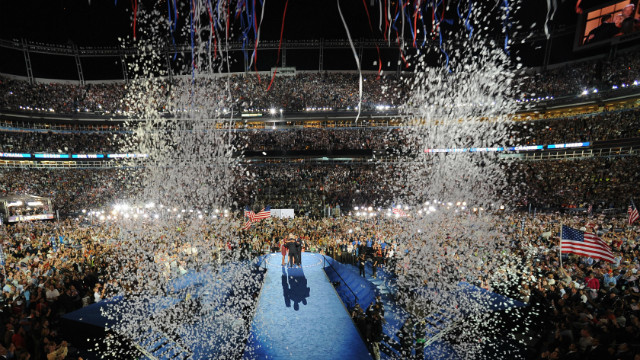 CNN Poll: Has Obama been all that?

Washington (CNN) - More than half of all Americans say that President Barack Obama has met or exceeded their expectations of how he would handle his job in the White House, but according to a new national survey, that represents a steep drop-off compared to the start of his first term in office.

And a CNN/ORC International poll released Friday also indicates the president gets low or middling approval ratings for some of the top concerns on the public's mind.

According to the survey, nearly half of all Americans say the economy remains the most important issue facing the country today, with the federal budget deficit in second place at 23%.

So how's Obama doing on those issues?

Forty-eight percent say they approve of the job he is doing on the economy, with 51% disapproving. Just over four in ten give the president a thumbs up on how he has dealt with the deficit, with 57% giving him a thumbs down.

"President Obama gets a lower approval rating on the deficit than any other of the 15 issues tested in the survey," says CNN Polling Director Keating Holland.

Number three on the list of important issues is health care, at 14%. Half the public approves of Obama's track record on that issue, but half disapprove.

Obama gets a better rating on foreign policy, and scores his highest approval on terrorism. But only 4% of the public says that foreign policy is the top issue facing the country. Six in ten approve of how Obama is handling environmental policy, which next to terrorism is his best grade in the poll, but only 2% say that the environment is the country's most important issue, number seven out of the seven issues tested.

"It all adds up to a familiar pattern for Obama: high marks on a wide range of issues that appear to be of secondary concern to the public and lower numbers on a few key issues like the economy and the deficit that are uppermost on Americans' minds," adds Holland.

The president's approval rating is up three points from a mid December CNN/ORC poll that was conducted just days after a suicidal gunman killed 26 people, including 20 children, at Sandy Hook Elementary School in Newtown, Connecticut.

The public is divided on the job Obama is doing on gun policy, with 46% approving and 49% disapproving, but only 6% said it was the most important issue facing the nation. The new poll was conducted Monday and Tuesday, prior to Wednesday's announcement by the president on new measures and proposals to curb gun violence.

Obama came into office four years ago with high expectations, and initially met them during his "honeymoon" period. In February, 2009, CNN polling indicated that three-quarters said that the new president was meeting or exceeding their expectations; only a quarter said he had fallen short. By the end of 2009, that was essentially a 50/50 split, and in 2010 and 2011, roughly six in ten said that Obama was falling short of their expectations.

Now, on the cusp of his second term, those figures are better for Obama - the number who say he has fallen short has dropped by 14 points since 2011, but nearly half still say he has not measured up to their initial hopes for his presidency. Four in ten say he has met expectations and 13% say he has exceeded them, for a total of 53% who give a positive rating to Obama's first term.

"The crosstabs show that the coalition which helped Obama win a second term is still behind him," Holland notes. "The number of people who say that he has met or exceeded their expectations is highest among women, younger Americans, and minority groups. Regionally, he gets his best marks in the Northeast."