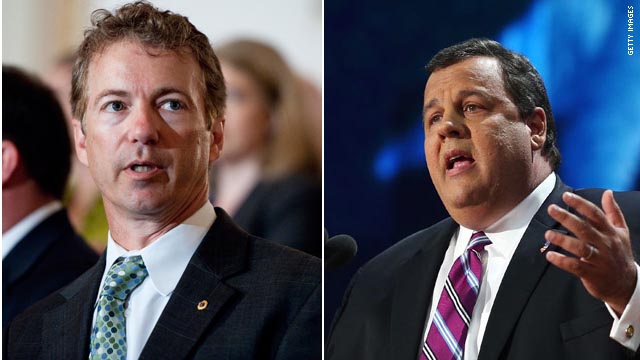 Republican Sen. Rand Paul of Kentucky took a swipe at New Jersey Gov. Chris Christie on Friday for his recent attacks against the National Rifle Association. Paul further argued the outspoken governor threw a "tantrum" when he recently criticized lawmakers in Washington over the Superstorm Sandy relief package.

Neither elected official has shot down the idea of running for president in 2016, fueling speculation that both are mulling a White House bid.

In an interview with conservative radio host Laura Ingraham, Paul mentioned Christie as an example of a high-profile Republican who's not standing up for Second Amendment rights in the ongoing gun control debate.

Christie made headlines Thursday for going off about a new NRA political attack ad that makes mention of the president's children. Calling the commercial "reprehensible," Christie said the organization lost credibility with the spot.

Paul, however, said Christie was hurting his own party.

"You have some Republicans backing down like Christie backing down and criticizing the NRA, and I think that doesn't do us any good," Paul said. "So I think Republicans do need to stand more firmly on this issue."

Asked why he thought Christie was going after the NRA, Paul said the governor may be trying to shore up votes for a potential bid down the road. He also pointed to Christie's biting comments against House Speaker John Boehner earlier this month for delaying a vote in the House on the $60 billion-plus federal aide package for Superstorm Sandy.

"I think he may be solidifying his support with Democrats in New Jersey and maybe liberal Republicans. If he wishes to do something nationally, I think criticizing the Second Amendment movement and the over-the-top, 'give me my money' stuff, 'I want all sixty billion now or I'll throw a tantrum'–I don't think that's going to play well in the Republican primary."

Paul argued that Republicans took issue with how the bill was being funded, not the purpose of the bill, itself.

"I think people need to think through what their positions on these things are," he said.