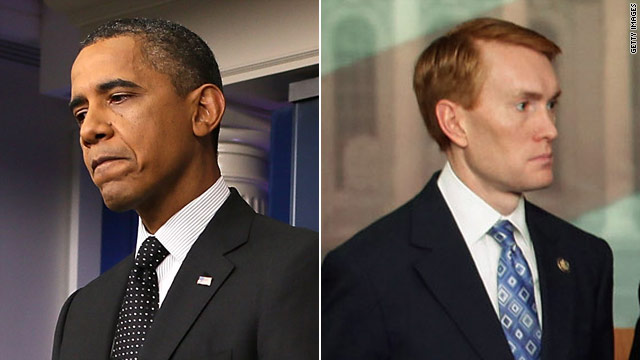 Both parties look for action from Congress

President Barack Obama and Republican Rep. James Lankford each called on Congress to take up legislation in their weekly addresses Saturday, the likes of which have not passed in years.

Obama advocated for the gun restrictions he outlined this week, including an assault weapons ban and stronger background check requirements.

Lankford, a second-term Republican from Oklahoma, urged Democrats in the Senate to pass a federal budget.

The Senate, he pointed out in the GOP weekly address, "hasn't approved such a resolution for almost four years - 1,361 days to be exact."

The assault weapons ban passed in 1994 and expired in 2004. It has not been renewed since.

Their calls for Congress to pick up the legislation come as the Houses have a full plate with self-created deadlines.

At the end of the year, the federal government went over its debt ceiling, and the treasury department is now using "extraordinary measures" to pay the country's bills. Should the Congress not raise the ceiling in the next few weeks, bills for spending it has already authorized will come due, but the government will not have authorization to write more checks.

On March 1 comes the sequester, those across the board spending cuts that both parties consider undesirable.

Congress created the sequester as an incentive to reach a deficit reduction deal, but when the deadline came, it only pushed back the spending cuts for March 1. Without action, the cuts trigger automatically.

Then on March 27, the resolution currently funding much of the government expires.

Lankford pointed to out-of-control government spending as a reason for the current fiscal mess.

"In the long history of our nation, we have never increased spending and federal debt faster than we have in this period," he said. "Every family and every business has a budget. Our nation should have a budget as well."

Both Obama and congressional Republicans have put forward annual budgets, though those proposals have either not been brought up for a vote or did not pass both Houses. Obama's 2012 budget was seen by analysts as a political document, both because it was an election year and any proposal was seen as unlikely to pass Congress.

"While we may not be able to prevent every senseless act of violence in this country, if there is even one thing we can do to reduce it - if even one life can be saved - we've got an obligation to try," Obama said.

He also announced this week 23 "executive actions" that he says will contribute to reducing gun violence.

In his address, Obama issued a call for action from his supporters.

"Ask your member of Congress if they support universal background checks and renewing a ban on military-style assault weapons and high-capacity magazines," he said. "And if the answer is no, ask them why not. Ask them why an A-grade from the gun lobby is more important than keeping kids safe in a first grade classroom."

In the GOP address, Lankford said that the new term is an opportunity for a fresh start.

"Though we disagree on many areas of policy, I join my fellow Americans in pledging to pray for the president, his family and our nation in the days ahead," he said.