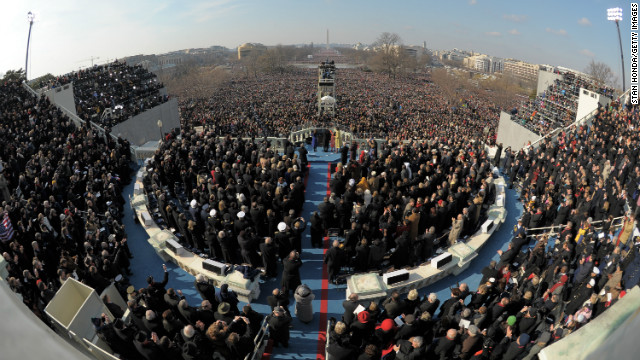 Washington (CNN) - President Barack Obama will lay out the values and vision for his second term in his Inaugural Address on Monday, setting up more detailed remarks on policy in his February 12 State of the Union.

A source with knowledge of the president's upcoming speech spoke to CNN about it on the condition of not being identified publicly.

He will speak about the division in Washington, the source said, but another official said Obama will not engage his political opponents by calling them out. He is expected to say that not all debates and political differences must be resolved, but that the country can act on issues where there is common ground.

One of the sources said Saturday that Obama is still working on his speech, which he will deliver on the West Front of the Capitol after ceremonially taking the oath of office Monday. The president will officially be sworn in at a brief ceremony on Sunday, as the Constitution stipulates the presidential term begins on January 20.

White House Press Secretary Jay Carney said Thursday that he had "no preview of his remarks.”

"The president, I think, is very appreciative of the fact that the American people have given him this opportunity to deliver a second inaugural address," Carney continued. "He, as you know, takes very seriously speeches of this kind and is very engaged in the process. He's working on his remarks."

Second-term inaugural addresses have an atmosphere different from first-term remarks, which are powered by pomp, circumstance and potential in a new president. Some describe second-term inaugurals as a second wedding, and this year will stand in sharp contrast to 2009, when Obama was the first black man to take the presidential oath of office.

Past second-term addresses have not set a particularly high bar, and historian Douglas Brinkley said “not too many matter.”

“It’s about a unison speech,” Brinkley said on CNN. “Anybody who’s looking for a lot of new policy ideas, they're not going to get any. This is about poetry and oratory.”

"It was a very unusual thing because we had an election and then immediately we had some fierce partisan combat because of the fiscal cliff deadlines,” Lizza said. “Usually you have a period where everyone kind of goes home after the election and then they come back in January and it cools down.

“We didn't have that, so things are very hot right now in Washington and frankly the lesson of the December congressional session does not give one a whole lot of optimism going forward,” he said.

Last month, the two parties and sides of Pennsylvania Avenue were split over tax increases and spending cuts which they partially settled with a last-minute deal. But lawmakers pushed the automatic spending cuts back to March and did not tackle the nation’s debt ceiling or the soon-to-expire resolution funding the government.

So, challenges lie ahead for the president who said in his first inaugural address, “we come to proclaim an end to the petty grievances and false promises, the recriminations and worn-out dogmas that for far too long have strangled our politics.”

His second inaugural may have to balance the message of unity with the realism he spoke of four years ago.

“Today I say to you that the challenges we face are real,” Obama said then. “They are serious and they are many. They will not be met easily or in a short span of time. But know this, America - they will be met.”

Obama’s first address was seen as speaking to the moment and the nearly two million who turned out the see the inauguration of the nation’s first black president. But reviewers said it was not as one which alone would be a highlight in history.

In 2009, he spoke amidst a financial crisis, saying, “everywhere we look, there is work to be done. The state of the economy calls for action, bold and swift, and we will act - not only to create new jobs, but to lay a new foundation for growth.”

There is also an expectation that his remarks cater to certain key constituencies.

Ben Jealous, president of the NAACP, referenced the high rate of unemployment among blacks compared with other demographic groups.

"We want to hear him say that he's committed to making sure that every single boat gets lifted, because it's clear that the tide has started to rise,” he said. “Some boats going up and some boats are still stuck right there."

Brinkley said he would be watching for Obama to mention important women, who often do not have significant roles in inaugural addresses.

“I've looked at a lot of these inaugural addresses and nobody ever seems to name-drop Susan B. Anthony or Eleanor Roosevelt and it might be time for that now, particularly because the president is getting some heat for not having enough women in the second term [Cabinet] and the women's vote contributed to his reelection vitally,” he said.

Some voters will be looking to hear what a second Obama term will mean for them, such as immigration reform or gun violence. The White House has advanced both as key issues leading into the new year, and Carney said on Tuesday that Obama “expects to move very quickly on immigration after the inauguration.”

Lizza said Obama should reach for an issue which is “reasonable and has a political sweet spot.”

"If you were optimistic about one issue (to get) solved this year on the president's agenda, I think immigration would be at the top of the list,” Lizza said. “Not easy but there's some potential for compromise."

While the themes are likely set with less than just two days remaining before the address, the exact words Obama will say may not be settled until just before he takes the stage.