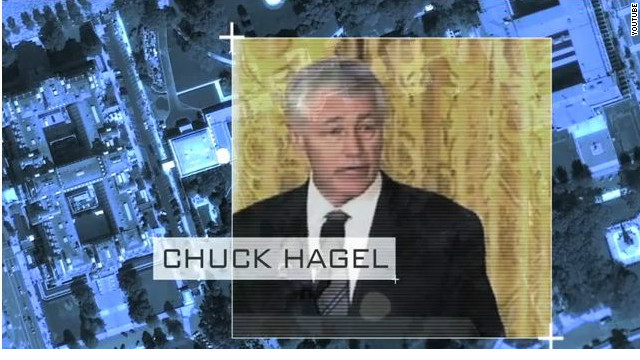 The first spot, from Americans for a Strong Defense, uses themes that mimic a movie trailer for a spy/action thriller. The 30-second spot says "we live in a dangerous world" and points to threats from Iran, North Korea, and "even Russia."

"But Barack Obama's nominee for Secretary of Defense wants America to back down," the narrator continues. "An end to our nuclear program. Devastating defense cuts. A weaker country."

The narrator then urges viewers to call their senator and vote against Hagel's confirmation "before it's too late."

A release from Americans for a Strong Defense states the ad will run on broadcast and cable networks and targets Sens. Mike Bennet and Mark Udall in Colorado, Sen. Mark Begich in Alaska, Sen. Mark Pryor Arkansas, Sen. Mary Landrieu in Louisiana and Sen. Kay Hagan in North Carolina.

Another group, the American Future Fund, also revealed a new spot targeting Hagel's record in the Senate, raising ethical questions around trips he accepted from lobbyists and his role on the board of Chevron, which receives millions in contracts from the Pentagon.

The American Future Fund and its political action sister group spent millions against President Barack Obama and on races for the U.S. House and Senate last year. They spent over $25 million in independent expenditures on the 2012 election, according to the Center for Responsive Politics, which tracks money spent in politics.

Sources close to the group said Tuesday they would spend about $500,000 to air the new ad on CNN and Fox News Channel.

Before being nominated, Hagel has faced opposition from both sides of the aisle for previous statements and positions, including his opposition to unilateral sanctions against Iran and a decision to not sign a letter in support of Israel while he was senator.

Seeking to set the record straight, Hagel said in an interview with the Lincoln Journal Star that critics have "completely distorted" his positions and he didn't "sign on to certain resolutions and letters because they were counterproductive and didn't solve a problem."

He got a boost in support last week when two key Jewish Democratic senators vowed to support him, saying their private conversations with Hagel gave them the clarification on his statements they needed to give him their backing.

His hearings are set to begin January 31.

– CNN's Kevin Bohn and Paul Steinhauser contributed to this report.