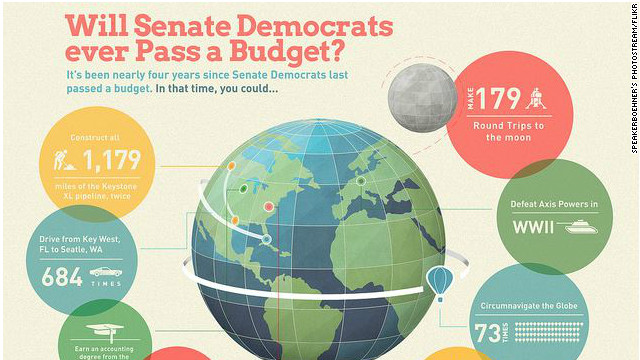 Those are three things one can do in four years, or as House Speaker John Boehner puts it, the same amount of time that has gone by without the Senate passing a budget.

In a new infographic released Tuesday, the speaker's office tried to put perspective on the lack of Senate action.

"The United States declared war and led the Allies to victory over the Axis powers in less time than it's taken Senate Democrats to pass a budget," the graphic states.

House Republicans are gearing up to vote Wednesday on a short-term extension on raising the debt ceiling, but with a requirement that the Senate pass a budget in the next few months. Otherwise, House GOP leaders have warned, members of Congress will go without pay.

A Boehner aide said the new infographic is the beginning of a major communications push to put Democrats on the "defensive for their complete failure" to do a budget.

Also making the list: The Pentagon–the largest office building in the world–could have been built three times.

"Need a vacation?" the graphic continued. "How about a cross-country trip from Key West, FL to Seattle, WA? You could make the drive 684 times, even if you stop at a few ATMs along the way."

Democratic Sen. Chuck Schumer of New York, however, said a budget plan is in the works but cautioned the Republican may not like it, as the measure will include tax increases.