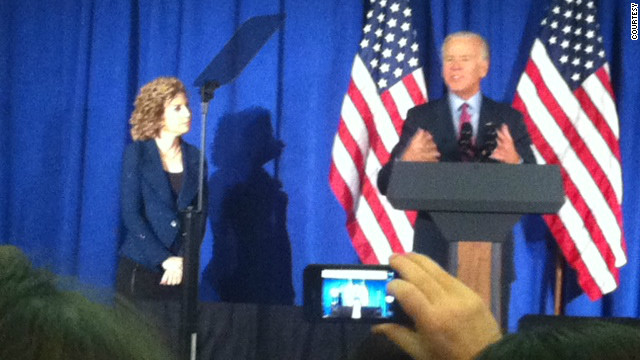 Washington (CNN) - Vice President Joe Biden met with Democratic Party delegates Tuesday afternoon, the latest move he's made over the past few days that could be considered an early signal that the vice president may be laying the groundwork for a possible 2016 run for the White House.

The vice president greeted Democratic National Committee delegates at the Omni Shoreham hotel in the nation's capital, where they were gathered for the DNC's annual winter meeting.

Tuesday's outreach to influential Democratic leaders and activists from across the country follows a weekend of hints that Biden may be gearing up for what would be his third bid for the White House.

And Monday the vice president proved again why he is a masterful politician when it comes to connecting with people, working the crowd as he walked along stretches of the inaugural parade from the Capitol to the White House.

Biden used his Tuesday meeting behind closed door with party delegates and leadership to thank everyone for their support in last year's election, according to a Democratic source who was in the room. The vice president also thanked outgoing DNC officers for their efforts, and welcomed the incoming party officials. He also spoke about his outreach efforts in the states.

While the vice president didn't mention any future bid for the Democratic nomination during his comments to the delegates, the source said it was clear that Biden was hinting towards 2016.

Biden, who served nearly four decades as a senator from Delaware, unsuccessfully ran for the Democratic nomination in 1988 and 2008, before becoming President Barack Obama's vice president. On Election Day 2012, when asked if it was the last time he'd vote for himself, the vice president said "No, I don't think so."

Mission number one for Biden right now is to help President Barack Obama pass his agenda. A successful second term for Obama will only help any Biden bid for president.

"Everything that should be done over the next two years that I should be part of would have to be done whether I run or I don't run. If this administration is successful, whoever is running as a Democrat is better positioned to win," Biden told Borger.

Outgoing Iowa Democratic Party chairwoman Sue Dvorsky, who saw Biden Saturday night at her state's inaugural ball and who attended Biden's Sunday swearing-in ceremony, says "I imagine we might see quite a bit of him again."

"Joe Biden remembers and cares about every single activist he's ever worked with. He's been in Iowa since 1987," adds Dvorsky. "When he looks out at a crowd, I've watched him, he can identify, 'Hey Patty,how's the grand daughter.' And then he names the grand daughter's college. And he's right, every time."

One person who may stand in Biden's way if he chooses to run is outgoing Secretary of State Hillary Clinton.

According to a CNN/ORC International poll conducted last month 85% of Democrats and independents who lean towards the Democratic Party said they'd be very or somewhat likely to support Clinton if she makes another bid for the Democratic nomination, with two-thirds of Democrats questioned saying they would be very or somewhat likely to support the vice president if he runs for the White House. Other possible 2016 candidates asked in the survey trailed Biden by at least 10 points.

Clinton is expected to step down as secretary of state later this month, with the Senate expected to confirm Sen. John Kerry of Massachusetts as her successor.

Clinton has repeatedly said that she intends to retire to private life and she's added that another run for the White House is not in the cards for her.

"Look, I'm flattered. I am honored," she told CNN's Wolf Blitzer last year about calls by other Democrats for her to consider another run in 2016. "That is not in the future for me, but obviously I'm hoping that I'll get to cast my vote for a woman running for president of our country."

The 2012 presidential election is barely in the rear view mirror, but in some ways the next race for the White House is already beginning.