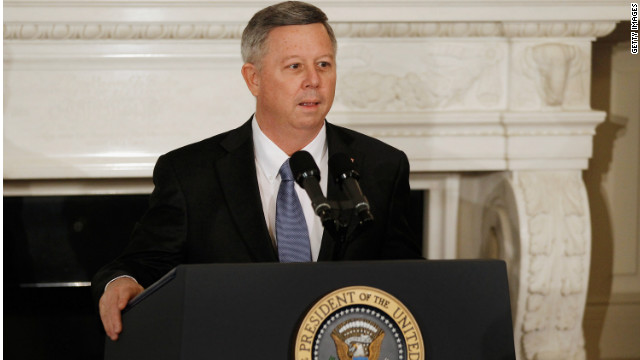 (CNN) - Nebraska Gov. Dave Heineman, a Republican, approved Tuesday a new route proposal for the Keystone XL pipeline, clearing another hurdle for the controversial project that has pitted congressional Republicans against President Obama.

In a letter to the president and secretary of state, Heineman said the new route for the pipeline, which would extend from Canada's tar sands down to the Gulf of Mexico, would have "minimal environmental impacts" in Nebraska and bring millions into the state.

Heineman at first disputed the pipeline and even called on the president to reject the plans because the pipeline would cross the Ogallala Aquifer, which provides water to farmers and ranchers of Nebraska to raise livestock and grow crops.

The Obama administration ultimately did reject the pipeline permit in January 2012, saying an alternate route from Nebraska had yet to be decided. While the entire 1,700 mile pipeline was not approved, Obama in March moved to fast-track the southern portion of the pipeline that runs from Oklahoma to the gulf.

TransCanada, the builder of the pipeline, proposed a new route for Nebraska in April 2012, which the state said would take six to nine months to review.

The company then filed for another application with the state department in May for the whole pipeline and began construction of the southern leg in August.

Opponents of the northern leg say there's too high of a risk for potential water and soil contamination from the 500,000 to 700,000 barrels of crude oil that would traverse the pipeline each day.

Supporters say the project leads to sustainable energy resources and creates jobs. Those sentiments have especially been amplified by Republicans on Capitol Hill.

In Nebraska, Heineman said a new reroute proposal would avoid the Sand Hills region and many areas with fragile soil. It would cross the High Plans Aquifer, but Heineman said TransCanada would assume responsibility for any impact.

The governor also wrote that the state would get $418 million in economic benefits and see $16.5 million generated in taxes from pipeline construction materials, as well as $11-13 million in property taxes.

"The Nebraska re-route by Governor Heineman moves us one step closer to Americans receiving the benefits of Keystone XL – the enhanced energy security it will provide and the thousands of jobs it will create," said Russ Girling, TransCanada's president and CEO officer, in a statement.

The company said the construction of the entire pipeline would create 9,000 jobs in the U.S.

Victoria Nuland, spokeswoman for the state department, said Tuesday in a press briefing that the administration will take the letter into consideration as they "continue (their) federal review process."

If anything, though, Obama's commitment to stand up for environmental concerns became more evident Monday during his inauguration speech. He vowed to fight harder for the environment, an issue that did not top his first-term agenda.

"The path towards sustainable energy sources will be long and sometimes difficult. But America cannot resist this transition, we must lead it," he said. "That's how we will maintain our economic vitality and our national treasure – our forests and waterways, our crop lands and snow-capped peaks. That is how we will preserve our planet, commanded to our care by God."

–CNN's Tom Cohen and Adam Aigner-Treworgy contributed to this report.