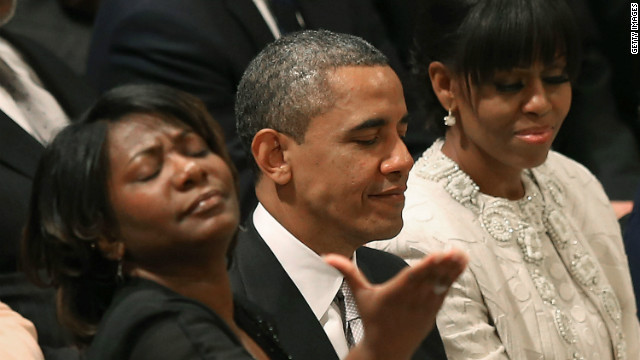 Rev. Adam Hamilton, senior pastor at the United Methodist Church of the Resurrection in Kansas, said Americans should "more often" give thanks to Obama and those who serve in higher elected office.

"Thank you, for giving yourselves, for sacrificing, for living in glass houses, for accepting the constant barrage of criticism with very little praise, for being willing to risk everything in order to serve country," he said.

Accompanied by his wife Michelle, Vice President Joe Biden and Dr. Jill Biden, Obama sat in the front row for the 90-minute service that featured prayers and readings from members of the Protestant, Catholic, Orthodox Christian, Jewish, Islam and Sikh faiths.

About 2,200 people attended the inaugural prayer service, a tradition that dates back to George Washington. Since Ronald Reagan's second inauguration in 1985, the service has been held at the National Cathedral in Washington.

Obama also attended a service before his ceremonial inauguration on Monday at St. John's Episcopal Church.

In his sermon Tuesday, Hamilton called for a unifying vision for the country, and argued that "without a vision, the people perish."

"They just bicker and fight and become so polarized they can't get anything done," he continued. "We're in need of a new common national vision. Not one that is solely Democratic or solely Republican. We need at least one or two goals or dreams that Americans on both sides of the aisle can come together and say, 'Yes, that's what it means to be American. That's where we need to go'."

Hamilton also joked that Obama should've been a preacher.

"God has given you a unique gift, Mr. President. Unlike any other president that we've had, you have the ability to cast vision and inspire people. You should have been a preacher," he said, drawing laughs.

- CNN's Ashley Killough and Adam Aigner-Treworgy contributed to this report.