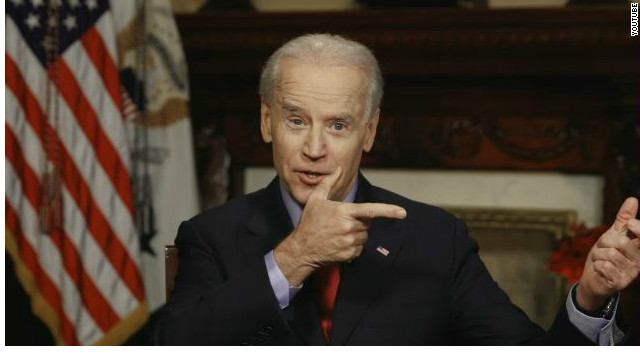 Answering critics who say assault weapons would be useful as a last line of defense should a natural disaster result in chaos, Biden gave some advice Thursday in a discussion about gun control during a Google+ Hangout.

The vice president, known for his colorful, off-the-cuff remarks, said a double-barrel shotgun would be more practical in such a scenario, adding assault weapons are harder to handle for people unfamiliar with the firearms.

"It's harder to use an assault weapon to hit something than it is a shotgun, OK?" he said, as he mimicked holding a gun with both arms. "So if you want to keep people away in an earthquake, buy some shotgun shells."

Biden's comments came the same day Democratic Sen. Dianne Feinstein introduced her assault weapons ban bill, a piece of legislation with strong support from President Barack Obama. The president and vice president rolled out their own proposals to curb gun violence last week, and Biden will hit the road Friday to take the administration's case before the public in Richmond, Virginia.

Feinstein's measure would stop the sale, transfer, importation and manufacture of more than 100 specialty firearms and certain semi-automatic rifles.

Along with banning assault weapons, the administration and Feinstein also want to install a 10-round limit for magazines.

"I'm much less concerned quite frankly about what you'd call an assault weapon than I am about magazines and the number of rounds that can be held," Biden said.

One participant in the web discussion–who had initially asked the question about earthquakes–also followed up by asking whether a magazine cap would actually have an impact in a scenario such as the mass shooting at the Connecticut elementary school that left 26 dead, including 20 children.

Biden said that gunman, who had 30-round magazines, had to swap out "four or five times." If limited to 10 rounds, however, the vice president argued the gunman would have had to swap out 25 or 30 times.

"And so what would happen is the response time, in fact, may have saved one kid's life. Maybe if it took longer, maybe one more kid would be alive," Biden said.

He also pointed to the gunmen in the Aurora, Colorado movie theater shooting and the Tucson, Arizona shooting, both of whom had to pause because their magazines either ran out or jammed.

When pressed on whether he expects an assault weapons ban or magazine limit to actually reduce crime, Biden said he's "not making the argument that this will end crime."