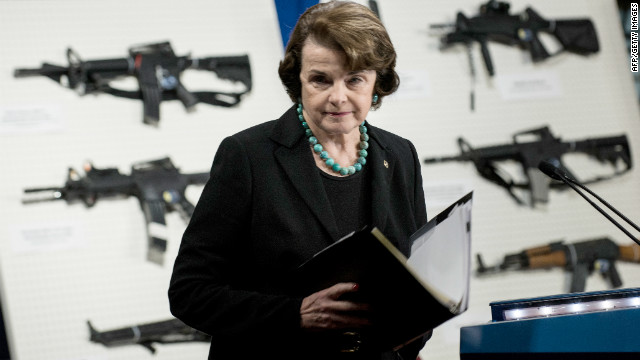 JUST IN: REPUBLICANS AIM TO COURT MINORITY VOTERS… A GOP task force charged with identifying winning strategies and broadening the party’s appeal with minority voters will deliver its recommendations to the Republican National Committee in March, Mississippi National Committeeman Henry Barbour said Thursday afternoon. “We have real challenges and we did get whipped,” in the 2012 election, Barbour told reporters at the RNC’s Winter Meeting in Charlotte. “That is not something we take lightly.” There was a somber acknowledgment from the five member task force that the GOP needs to do a much better job cultivating minority voters and selling Republican ideals and policies in those communities. Barbour described the report as a “campaign plan” in which parts of it would be made public, while other portions would remain confidential. “It will give direction of where we go,” Barbour said. – Mark Preston

DIFI GOES FOR THE GUNS: 'ENOUGH IS ENOUGH,' FEINSTEIN SAYS IN PROPOSING NEW GUN BAN... On one side were pegboard panels mounted with various assault rifles and semi-automatic weapons - including a Bushmaster similar to the one used in last month's Newtown school massacre. Behind the stage stood police officers supporting a renewed ban on such firepower. One by one, victims of gun violence told their brief stories and expressed support for a new federal ban being proposed by Sen. Dianne Feinstein on some assault rifles and semi-automatic weapons. Almost six weeks after the Connecticut shooting rampage that killed 20 first graders, Feinstein introduced her measure Thursday, with Reps. Carolyn McCarthy of New York and Ed Perlmutter of Colorado doing the same in the House. – Dana Bash and Tom Cohen

AND REFLECTS: Sen. Dianne Feinstein speaks to reporters after her press conference… “I became mayor (of San Francisco) as a product of assassination. Mayor George Masconi, at the time, with one year left on his term, was shot and killed. And the first openly gay public official in America was shot and killed by a colleague of mine. … I was the one that found Supervisor Milk's body and I was the one that put the finger in the bullet hole trying to get a pulse. Once you have been through one of these episodes, once you see what a crime scene is like, it isn’t like the movies, it changes your view of weapons.”

AND THE NRA RESPONDS: A WRITTEN STATEMENT FROM THE NATIONAL RIFLE ASSOCIATION: “Senator Feinstein has been trying to ban guns from law-abiding citizens for decades. It's disappointing but not surprising that she is once again focused on curtailing the Constitution instead of prosecuting criminals or fixing our broken mental health system. The American people know gun bans do not work and we are confident Congress will reject Senator Feinstein's wrong-headed approach.”

TRAIL TRIVIA
(Answer below)
When was the last time a U.S. secretary of state’s political affiliation did not match the president’s?

This is truly inside baseball.

The Washington Nationals baseball team used Twitter on Thursday to announce that they’ll add another president to the popular Racing Presidents event for the upcoming season. In Washington, the mid-game race at Nationals Park is a big deal. Since the team moved to the capital from Montreal in 2006, caricatures of four presidents – Thomas Jefferson, Abraham Lincoln, George Washington and Theodore Roosevelt – race around the field to the amusement of the crowd.

We reached out to Richard Norton Smith, a presidential historian and someone who has worked at five presidential libraries, to give us the pros and cons of each possible presidential addition to a race that elicits fierce Washington debates.

Here are some of the best responses:

Andrew Jackson
Pro – “He is the only president that has an age named after him. The Age of Jackson.”
Con – “I am not sure the Cleveland Indians or the Atlanta Braves would be eager to play any team with Andrew Jackson as a mascot.”
Franklin D. Roosevelt
Pro – “If there was room on Mt. Rushmore for a fifth face, he would be it. And of course the first four presidents that the Nationals chose are all on Mt. Rushmore. He is the most logical to be added to the quartet. And, I suppose, as someone who has served longer than anyone else, he should be useful for extra innings.”
Con – “He was a football cheerleader, which would be a con in baseball.”
Richard Nixon
Pro – “Nixon wanted to be a sports writer. Nixon came alive talking sports. I know that sounds odd, but if you want the real Nixon, get him talking baseball. At one point, he was actually considered for baseball commissioner and he was a man who probably could have been baseball commissioner but settled for president.”
Con – “Where do we begin? Didn’t he sell out baseball for ping pong in China?”
Bill Clinton
Pro – “Incredible appetite for game.”
Con – “Incredible appetite for game.”

For the rest of Smith’s response, read this story on CNN’s Political Ticker.

On Facebook and Twitter, we asked our readers to respond to our question: “Which president do you think it should be?”

So far, Nixon is ahead, nearly doubling the rest of the pack.

Taft received a write in vote and also elicited a well-informed response.

Erica Hawksworth writes: “Should be Taft. There would be no seventh-inning stretch without him!”

Erica is right. Not only is the portly president credited with the tradition of the presidential first pitch on Opening Day, but legend has it that Taft also inspired the seventh-inning stretch when he stood to stretch during a Washington Senators game and everyone else in the stadium stood with him.

The Washington National’s pitchers and catchers report on February 12. And if you can’t tell, Gut Check is excited.

Leading CNNPolitics: GOP chief plans major overhaul to party
Reince Priebus is developing a political plan he hopes, in the near term, will re-energize his party in time for the 2014 midterm elections, while also developing a long-term strategy to compete among key demographic voting blocs - Hispanic, Asian, African-American - that broke so heavily Democratic in November. To hear Priebus tell it, the goal is two-tiered: Restructure the party on a tactical level to match the sophisticated and data-driven efforts of the Obama campaign, and create a communications plan to sell the GOP's message to voters it failed to connect with in 2012. It's an overwhelming task and it's going to cost money, lots of money. – Mark Preston

Leading Drudge: Here Come The Flies
A fly lands between the eyes of U.S. President Barack Obama while he speaks in the State Dining Room of the White House in Washington.

Leading HuffPo: Failibuster
Progressive senators working to dramatically alter Senate rules were defeated on Thursday, with Senate Majority Leader Harry Reid (D-Nev.) and his counterpart, Minority Leader Mitch McConnell (R-Ky.), set to announce a series of compromise reforms on the Senate floor that fall far short of the demands. The language of the deal was obtained by HuffPost and can be read here and here. The pressure from the liberal senators, led by Oregon Democrat Jeff Merkley and backed by a major coalition of progressive groups, created the political space for Reid to cut the deal with McConnell, which includes changes to how the Senate operates but leaves a fundamental feature, the silent filibuster, in place. – Ryan Grim and Sam Stein

Leading Politico: Democrats launch plan to turn Texas blue
National Democrats are taking steps to create a large-scale independent group aimed at turning traditionally conservative Texas into a prime electoral battleground, crafting a new initiative to identify and mobilize progressive voters in the rapidly-changing state, strategists familiar with the plans told POLITICO. The organization, dubbed “Battleground Texas,” plans to engage the state’s rapidly growing Latino population, as well as African-American voters and other Democratic-leaning constituencies that have been underrepresented at the ballot box in recent cycles. Two sources said the contemplated budget would run into the tens of millions of dollars over several years – a project Democrats hope has enough heft to help turn what has long been an electoral pipe dream into reality. – Alexander Burns

Leading The New York Times: Democrats in Senate Confront Doubts at Home on Gun Laws
Talk of stricter gun control has stirred up a lot of unease here, a place where hunters vie for top prize (a 26-inch LED television) in the Big Buck Photo Contest, and ads for a gun-simulator game ask, “Feel like shooting something today?” But before Senator Joe Manchin III invited a group of 15 businessmen and community leaders to lunch last week to discuss the topic, he had only a vague idea of how anxious many of his supporters were. “How many of you all believe that there is a movement to take away the Second Amendment?” he asked. About half the hands in the room went up. – Jeremy Peters

- Clinton jokes about sentimentality – perhaps she saw today’s New York tabloids –
SECRETARY OF STATE HILLARY CLINTON AT THE CONFIRMATION HEARING FOR HER REPLACEMENT, JOHN KERRY: “We're all getting a little emotional and sentimental around here with about a little over a week to go in my tenure.”

- Johnson says he should not have 'speculated' about Clinton's emotional moments -
REPUBLICAN SEN. RON JOHNSON OF WISCONSIN IN AN INTERVIEW WITH CNN: “I did not accuse her of crying, no. I was responding to a question, Soledad. I probably speculated and I shouldn't of.”

Gut Check Full Service… After Clinton’s testimony on Wednesday, Johnson told BuzzFeed: “I think she just decided before she was going to describe emotionally the four dead Americans, the heroes, and use that as her trump card to get out of the questions. It was a good way of getting out of really having to respond to me.”

- Women in Combat: Duckworth - Not News to Me -
DEMOCRATIC REP. TAMMY DUCKWORTH OF ILLINOIS IN AN INTERVIEW WITH NBC NEWS: “Women are already serving in combat… I didn’t lose my legs in a bar fight.”

- Biden's gun advice for earthquakes -
VICE PRESIDENT JOE BIDEN ON HIS “FIRESIDE” GOOGLE HANG OUT: “It's harder to use an assault weapon to hit something than it is a shotgun, OK? So if you want to keep people away in an earthquake, buy some shotgun shells.”

Unlike the secretary of defense, the position of secretary of state has been a position that has fallen to someone whose party affiliation matches the party that has won the presidency.

Johnson, who served as Abraham Lincoln’s vice president, assumed the White House after the president was assassinated in Ford’s Theater on April 15, 1865. Johnson was considered a War Democrat, a civil war term that described Democrats who desired more aggression against the confederacy than other Democrats, and the Republican Party, in an effort to broaden Lincoln’s electoral base and appeal, nominated him to be vice president in 1864.

Seward was an experienced politician, serving as the governor of New York before serving as secretary of state under Lincoln. After the president’s death, Seward was a carry over to the Johnson administration and served until 1869.

His most famous move at the state department: purchasing Alaska from Russia for $7 million. The purchase was roundly mocked and newspapers labeled Alaska “Seward’s icebox” or Andrew Johnson’s “polar bear garden.”

In hindsight, however, the purchase of Alaska for a whopping 2 cents per acre was a smart business decision.

It took a little back and forth, but congrats to Bernard Lin (@blin11592) for correctly answering Gut Check trivia. Nice work.