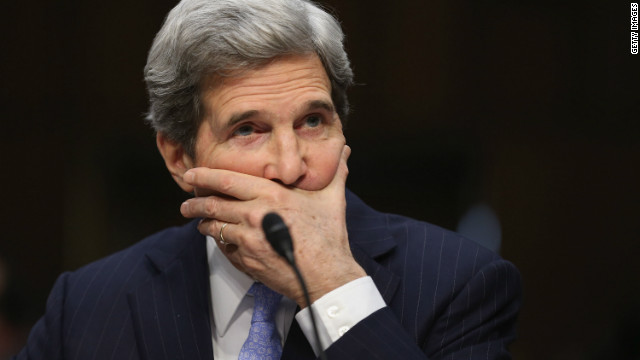 Hagel, President Obama's pick for Defense Secretary, has been criticized by both sides of the aisle for his positions and past statements.

Some conservatives argue the Vietnam veteran is too dovish when it comes to foreign policy. They point to his opposition to unilateral sanctions against Iran and support for nuclear disarmament. Republican Sen. Bob Corker of Tennessee said Thursday Hagel's affiliation with an anti-nuclear weapons group called Global Zero is "just concerning."

But Kerry argued Hagel is "realistic," and the Global Zero initiative "is not talking about today's world."

"It's a goal. It's an aspiration. And we should always be aspirational," he said. "But it's not something that could happen in today's world, and nor could any leader today sit here or in any other chair and promote to you the notion that we ought to be cutting down our deterrent level below an adequate level to maintain deterrence."

He said Hagel is "a strong patriotic former senator, and he will be a strong secretary of defense."

While Hagel has seen vocal support from a few other key senators, his nomination will likely be an uphill battle. One conservative group, American Future Fund, has gone as far as taking out television ads targeting Hagel.

The Defense Secretary nominee's hearings are set to begin January 31.