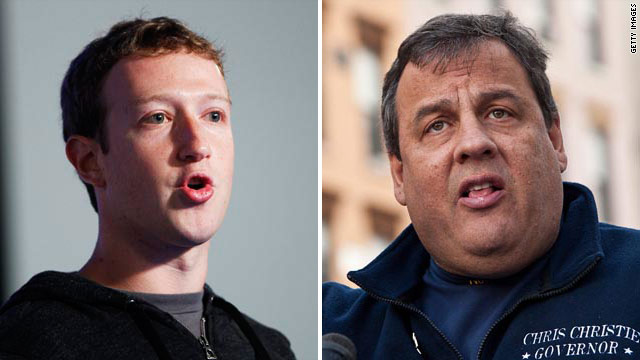 Zuckerberg to fundraise for Christie

"Mark and (his wife) Priscilla have worked closely with Governor Christie on education reform in the Newark school system," Sarah Feinberg said. "They admire his leadership on education reform and other issues and look forward to continuing their important work together on behalf of Newark's school children. Mark and Priscilla are happy to host him at their home to support his re-election."

Bill Palatucci, a Christie adviser, said the trip will be "the beginning of a number of out-of-state trips we'll be having to raise money to support the Governor's re-election effort."

"We announced last week that we will not be taking New Jersey's matching funds so we can raise as much as we can from donors," he announced.

This isn't the first time Zuckerberg has been tied to Christie, who's considered to be a potential 2016 Republican presidential candidate. The young billionaire appeared on "The Oprah Winfrey Show" in 2010 with the governor and Newark Mayor Cory Booker, a Democrat, to announce a $100 million donation to improving schools in the city.

Zuckerberg praised the state's education reform efforts. According to Booker at the time, 50% of high school students in Newark did not graduate. Booker and Christie hoped that their new plan will provide a model for education reform nationwide.

While Booker was considering a challenge against Christie in this year's gubernatorial election, the popular Democratic mayor decided instead to explore a 2014 Senate bid against Sen. Frank Lautenberg, a fellow Democrat.

In the gubernatorial race, Christie is the overwhelming favorite. Earlier this week, he landed another big union endorsement from the Port Authority Police Benevolent Association–a rare feat for a Republican. Last month he secured the backing of the Laborers International Union of North America.

Zuckerberg did not make any endorsements in the presidential race last year, but Facebook's political action committee dropped money in some elections. The group spent $267,500 on federal candidates: 47% to Democrats, 53% to Republicans, according to the Federal Election Commission.