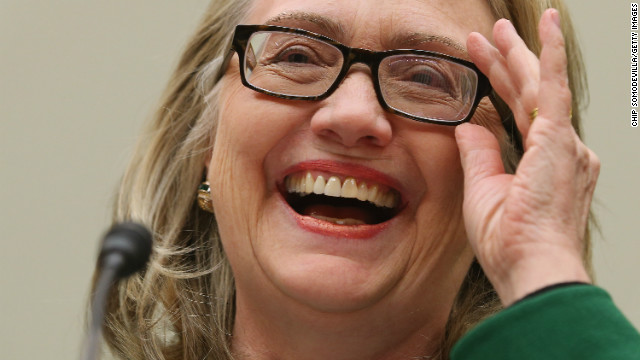 (CNN) – Those black rimmed glasses that Secretary of State Hillary Clinton has worn since returning to work following a blood clot in her head were mandated by her doctors, according to one of her top aides.

"She'll be wearing these glasses instead of her contacts for a period of time because of lingering issues stemming from her concussion," Philippe Reines said. "With them on she sees just fine."

Clinton was discharged from a New York hospital on January 3, three days after she was admitted for treatment of a blood clot in a vein between her skull and brain. She had been admitted after doctors found the clot during a medical test related to a concussion she suffered in December.

The secretary was treated with blood thinners to dissolve the clot, which did not result in a stroke or any neurological damage. Clinton's concussion occurred when she fainted because of dehydration caused by the flu.

The rectangular frames Clinton has sported since leaving the hospital became the subject of scrutiny by New York Magazine, which published an article called "Seven Things Hillary Clinton Was Saying When She Adjusted Her Glasses."

The analysis of Clinton's gestures during this week's Benghazi hearings included the "Is This Dude for Real?" adjustment and the "Ugh, I Wish I Still Had a Concussion" adjustment.

Of the article, Reines said Clinton "got a kick out of this when she saw it crystal clearly."