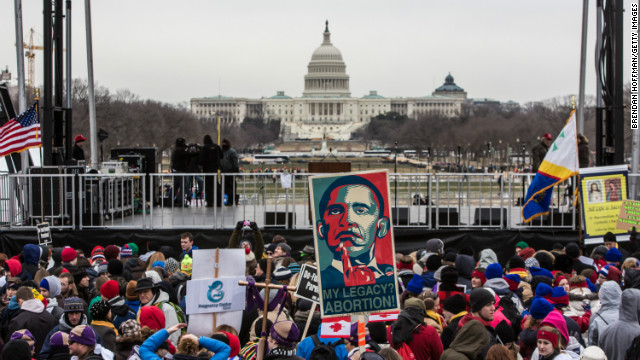 (CNN) - Opponents of abortion congregated on the National Mall in Washington on Friday and counted several prominent members of Congress and other political figures among their ranks.

The demonstrators at the March for Life marked the 40th anniversary earlier this week of the Supreme Court ruling in favor of abortion rights in the 1973 case Roe v. Wade.

His plea was very personal: Santorum and his wife, Karen, are raising a four-year-old, Bella, who suffers from the developmental disorder Trisomy 18. Many children born with the disorder either die before birth or before their first month, according to the National Institutes of Health.

Santorum put on hold his White House run and eventually ended after his daughter was repeatedly hospitalized, and as the electoral math made winning the GOP nomination unlikely.

"One of our little ones is not here, but she made quite an impression on this country as a result of the race that we were involved in last year," he said. "And what we saw from our little girl, a little girl that we were encouraged to abort, we were encouraged to abort her, because well, she was going to be saddled with disabilities and it would be better for her. But we all know that death is never better."

Sen. Rand Paul, a first-term Kentucky Republican who is a physician, spoke about times he looked "into the eyes of one-pound babies … cradled their small bodies in the palm of one hand."

"I believe that great nations and great civilizations spring from a people who have a moral compass," Paul said. "Our nation is adrift, adrift in a wilderness where right and wrong have become subservient to a hedonism of the moment. I believe our country is in need of a revival."

House Speaker John Boehner recorded a video message for the event and spoke about the importance for the anti-abortion movement of "defining human rights as the issue of our time because human life is not an economic or political commodity and no government on earth has the right to treat it as such."

Rep. Chris Smith, a New Jersey Republican and strong opponent of abortion, blasted the "infamous, reckless, and inhumane abandonment of women and babies to the abortionists."

"Know this, Mr. President, the pro-life movement is not only on the side of compassion, justice, and inclusion, we are on the right side of responsible science and of history," he said, directing his remarks at President Barack Obama.

Other speakers at the event included faith leaders, anti-abortion activists, and women who said they regretted having abortions.

They bundled up, braving wind chill temperatures in the mid-20s for the rally in the shadow of the Capitol. As attendees left the rally to march up Constitution Avenue to the Supreme Court building, snow began to fall.