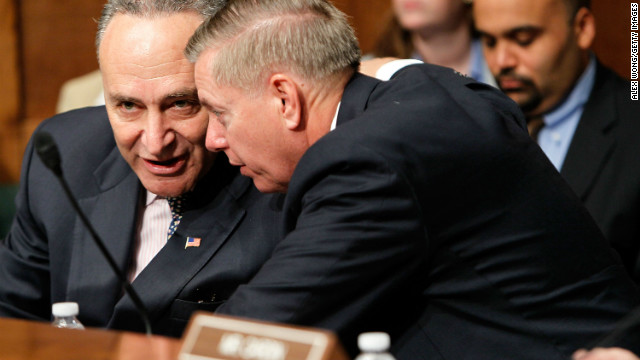 How the Senate immigration plan came together

Washington (CNN) – The emerging immigration reform plan from a group of bipartisan senators, set to be announced Monday, is the product of a months-long process that began after this November's election, which saw overwhelming Latino support for President Barack Obama.

A source familiar with the plan's development told CNN Monday that the process began right after the election with a call from Republican Sen. Lindsey Graham to Democrat Chuck Schumer, proposing they re-start their work on a comprehensive immigration bill that had broken down in 2010.

Those 2010 efforts drew fire from all sides, with the progressive publication The American Prospect at one point calling their plan "ridiculous" and GOP party committees in Graham's home state of South Carolina censuring him for his congressional votes on immigration. Talks eventually stalled.

In their November phone call, Graham told Schumer that fellow Republican Sen. John McCain also wanted to be involved this time. McCain was an early supporter of comprehensive immigration reform, but backed away from pushing a path to citizenship after his position hurt him with GOP primary voters during his run for president in 2008.

Soon after Schumer and Graham's conversation, a core group of six senators formed, meeting five times in Schumer and McCain's Capitol Hill offices. That group included Schumer, Graham and McCain, along with Republican Marco Rubio of Florida, and Democrats Robert Menendez of New Jersey and Dick Durbin of Illinois, the number two Democrat in the Senate.

Two other senators – Jeff Flake, R-Arizona, and Michael Bennet, D-Colorado – attended some of those meetings, but not all of them, and were the last to sign onto the proposal, which is set to be announced at a press conference Monday afternoon.

The eight lawmakers' proposal includes provisions for a path to citizenship for undocumented immigrants already living in the United States, and guest worker and employment verification systems.

At their first meeting, the senators established a timetable for themselves: create a framework for immigration reform by the end of January, write the more detailed text of a bill by March, and pass the legislation in the Senate by the end of July.

That schedule would allow the Republican-controlled House of Representatives enough time to work through the bill so that President Barack Obama could sign it into law by the end of the year – avoiding any overlap with the 2014 midterm elections.

Debate on the measure in the House is still a far way off, though a spokesman for House Speaker John Boehner said Monday "The Speaker welcomes the work of leaders like Sen. Rubio on this issue, and is looking forward to learning more about the proposal in the coming days."

The Senate group's last meeting was January 23, which was followed by several days of working through certain details of the plan. On Sunday, Schumer called the president to tell him the group had created an immigration reform framework, and was planning to announce the measure on Monday.

That's one day ahead of Obama's own immigration push, slated to come during a speech in Las Vegas Tuesday. The source who provided the details of how the plan came about said the Senators timed their announcement to give the president's speech more "oomph."

The source also revealed that the White House has been working on its own immigration reform bill – an unusual move for the executive branch – that they were planning to ask Sen. Patrick Leahy to introduce in the Senate Judiciary Committee, which Leahy chairs.

The source said if the White House does push their own bill, it would only serve as a "fallback" to the bill pushed by the eight senators to make clear they have a "contingency plan" if the bipartisan process breaks down.

So what are the potential sticking points? The source pointed to still-unsettled items in the bipartisan framework released Monday, which lacked specific details on how border security would be bolstered and how a path to citizenship for immigrants already in the United States would work.

Senators still need to decide whether border security measures would be determined by boots on the ground or drones, or a combination of both, and whether any final decision would be subject to assessment by an administration official.

And on the path to citizenship, the senators must determine a compromise between the plan advanced by Rubio, which would not increase the number of permanent resident cards – often called "green cards" - available, and the Democrats' preference, which would increase the number of permanent resident slots for the eleven million undocumented immigrants who are stuck waiting for legal status.