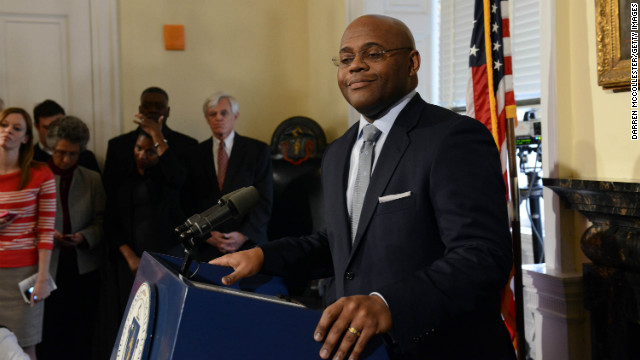 So say the governor and lieutenant governor of Massachusetts.

Wednesday Democratic Gov. Deval Patrick announced that a trusted former aide was his choice to serve as an interim replacement for Sen. John Kerry, who will step down later this week to take over as secretary of state.

Patrick named William "Mo" Cowan, his former chief of staff, as senator. Cowan, who will serve through the June special election, will become the second African-American currently serving in the U.S. Senate, alongside Republican Tim Scott of South Carolina. Scott, who was just elected in November to a second term as a congressman, was named last month to succeed Sen. Jim DeMint, who stepped down from his seat.

Speaking to reporters at a news conference at the state capital in Boston, Patrick added that Cowan "has been a valued ally to me and to our work on behalf of the people of the Commonwealth and I am confident he will be to his new colleagues in the United States Senate and to the president as well."

Last month President Barack Obama nominated Kerry, the longtime senator from Massachusetts and 2004 Democratic presidential nominee as his choice to succeed outgoing Secretary of State Hillary Clinton. The Senate overwhelming confirmed Kerry on Tuesday, and he is expected to take over as America's top diplomat at the end of this week.

Cowan praised the outgoing senator and his staff: "Secretary Kerry and his Senate staff have extremely well by the people of Massachusetts and working with that staff I aim to continue that work over the next few months."

Cowan, a North Carolina native who came to Boston in the early 1990's and became one of the city's leading African-American lawyers, said he can make a difference even in the short amount of time he'll serve as a senator.

"During this interim period I will go to work every day with the needs and aspirations of our state's citizens and residents foremost in my mind."
Both Patrick, who is also black, and Cowan, were asked about the significance of the naming of an African-American to the Senate.

"The commonwealth and the country are changing. The breadth of diversity, of background, of ethnicity, and race is deeper and broader than ever," said Patrick.

"Massachusetts is a commonwealth of opportunity for everyone," added Cowan, but he also said that "I suspect that the reason I'm standing here is not because of my personal color, I'm African-American. I believe, as the governor's indicated, that he's got confidence that I will do the job that he's sending me to do."

Patrick, in his opening remarks, mentioned that Cowan was also "cool."

Patrick said he made the decision to name Cowan Tuesday. Another person he was believed to be considering as interim senator was Carol Fulp, a big backer of both Patrick and President Barack Obama, who is also very plugged into Bay State Democratic politics. Fulp is also African-American.

Other names mentioned over the past two months were Vicki Kennedy, the widow of the late Sen. Ted Kennedy, and former Massachusetts Gov. Michael Dukakis, the 1988 Democratic presidential nominee.
And former Rep. Barney Frank, who retired at the end of last year after decades in the House, earlier this month made a very public pitch to be named the interim senator.

Patrick made clear that whom ever he picked would serve as a placeholder and would not run in the special election to fill Kerry's seat. Asked if this is going to be a short political career or if he'll run for office in the future, Cowan said "this will be a very short political career," adding that "I am not running for office. I am not a candidate for public service at anytime today or in the future."

The special election will be held on June 25. As of now liberal Rep. Edward Markey is the only Democrat who's announced a bid. The Democratic Senatorial Campaign Committee, Kerry and Vicki Kennedy, the widow of the late Ted Kennedy, have endorsed Markey, the longest serving member of the Bay State's congressional delegation.

Rep. Stephen Lynch will hold a news conference in Boston on Thursday to announce he plans to run, CNN has learned. The social conservative Democrat from South Boston's been flirting with a run the past two months. Earlier this month two other Democrats who were considering bids, Rep. Michael Capuano and state Sen. Ben Downing, decided against running.

On the Republican side, the big question is whether former Sen. Scott Brown will make a bid to return to the Senate, or instead run for governor in 2014?

"Brown is still in the process of deciding and discussing it with his wife and family. No talk on timing yet," said a GOP strategist in Massachusetts close to Brown, who insisted on anonymity to speak more freely.

Whoever wins the June special election would serve the final year and a half of Kerry's term and would then have to run again in 2014 for a full six-year term in office.