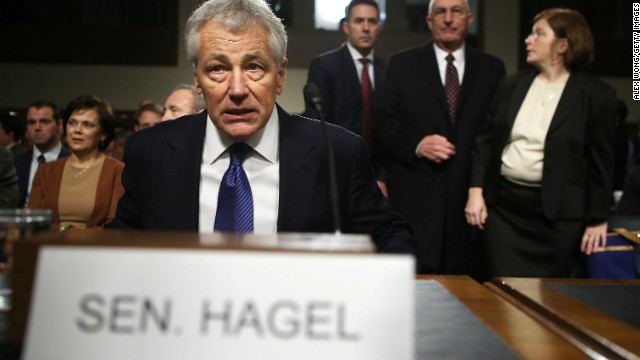 Buzz in the Senate: Hagel wasn't so hot in hearing

Washington (CNN) - Senators won't give their official reading of former Sen. Chuck Hagel's performance at Thursday's nomination hearing until they vote on his nomination to be defense secretary.

But some think Hagel didn't do so well.

Several senators told CNN that during a series of Senate floor votes during a break in the hearing that Hagel's lackluster performance, in the opinion of many senators, was all the buzz on the Senate floor.

One senator who is undecided but was not at the Armed Services Committee hearing says it is "all the talk – I mean all the talk." Fellow senators are "shocked" by how ill prepared Hagel seemed for basic questions about controversial comments he has made, this senator said.

A Democrat on the committee supporting Hagel shook his head in disbelief, saying he was surprised Hagel was not more forceful, especially since he has been on the other side of the dais and knows how this works. Hagel served in the Senate from 1997 through 2008.

Another undecided senator - this one who serves on the committee responsible for vetting Hagel's nomination - was also taken aback that Hagel didn't have better answers for Sen. John McCain's pointed questions, especially on the Iraq surge. The senator said Hagel could have simply said "the Iraq war was wrong, but once we were there, the surge was the right way to go."

Separately, an administration official involved in the confirmation process said "a lot of what we've seen today is political theater. Chuck Hagel is someone very pragmatic and he wanted to have a conversation. He didn't take the bait. Some people will say he didn't get angry or mad, but that's not who he is. He decided to take the high road."

But that said, a second official acknowledged "we think he's on his way, but he didn't round the bases today. He could have. He didn't." Had Hagel "rounded the bases," he would have ensured no senator would step forward to filibuster him.

To be sure several Democrats on the committee defended Hagel, telling CNN they believe he was getting attacked with unfair gotcha questions on statements he made years ago.

He added that he hopes the committee could vote on Hagel's nomination as early as next Thursday.

- CNN's Barbara Starr and Rachel Streitfeld contributed to this report.