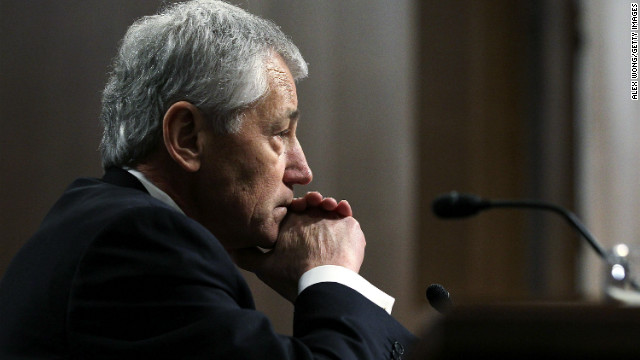 BRUISED: WANNABE SECRETARY OF DEFENSE ON THE DEFENSIVE… Several senators tell CNN’s Dana Bash that Chuck Hagel’s poor performance today is all the buzz. Hagel is “all the talk – I mean all the talk,” says one undecided senator, who noted that his colleagues are “shocked” by how ill-prepared he seems for basic questions about past controversial comments. Hagel is even struggling among those who support him; one Democrat on the Armed Services Committee shook his head in disbelief over Hagel and told Bash that he is surprised the former Nebraska senator is not being more forceful in his answers, especially since he has been on the other side of the dais and knows how this works.

A TASTE OF THE QUESTIONS: REPUBLICAN SEN. JOHN MCCAIN AT HAGEL’S HEARING... “I think history has already made a judgment about the surge, sir, and you're on the wrong side of it and your refusal to answer whether you were right or wrong about it, it's going have an impact on my judgment as to whether to vote for your confirmation or not. I hope you will reconsider the fact that you refused to answer a fundamental question about an issue that took the lives of thousands of young Americans.”
REPUBLICAN SEN. JAMES INHOFE AT HAGEL’S HEARING: “The question I’d like to ask you, and you can answer for the record if you’d like, why do you think the Iranian foreign ministry so strongly supports your nomination to be the Secretary of Defense?”

GUNS: TUNE IN… Anderson Cooper brings all of the critical voices in the national gun debate together in a special town hall airing tonight at 8 p.m. & 10 p.m. ET. Check out What Caught Our Eye below for a preview of what to expect.

TRAIL TRIVIA
(Answer below)
If confirmed, former Sen. Chuck Hagel will become the first enlisted soldier to serve as Secretary of Defense. What other first did Hagel hold while serving in Vietnam?

A mother who lost her 6-year-old son in Newtown, a former NRA president, the police chief of Philadelphia and a victim of the Virginia Tech shooting are just a few of the voices you will hear from tonight in a national town hall on gun violence hosted by Anderson Cooper.

Gut Check just returned from the special taping at The George Washington University and there is one person, Sarah McKinley, who specifically caught our eye, because her answer on whether there should be new gun regulations shed light on the complexity of the debate by framing fear and concern in the language of an average American with an incredible story:

McKinley: I personally have no need for an assault weapon …

Cooper: You are pretty good with a handgun.

McKinley: It was a 12-gauge. … At the same time I think that once they start limiting they are going to limit more. They are not just going to come in and take our guns away. They are going to start with one thing and then go to something else.

So who is McKinley? She is a young mother who shot to death a man earlier this year who was breaking into her home, an act that some say saved the lives of herself and baby.

This is just one of the many stories you will see tonight in the town hall. Tune in at 8 p.m. & 10 p.m. ET and join in on the accompanying conversation on Twitter with #gundebate360.

Leading CNNPolitics: Geraldo Rivera has campaign plans in the vault
As if the upcoming Senate race in New Jersey couldn't get more interesting, Fox News host Geraldo Rivera said Thursday he is “truly contemplating” throwing his hat in the ring for the 2014 election. “I mention this only briefly...fasten your seatbelt," he said on his radio program. "I am and have been in touch with some people in the Republican Party in New Jersey. I am truly contemplating running for Senate against Frank Lautenberg or Cory Booker in New Jersey.” – Ashley Killough

Leading Drudge: Why Has Iran Endorsed You?

Leading HuffPo: 'I'm Not A King'
President Barack Obama said on Wednesday that he hopes immigration reform can be passed into law by June, but in the meantime he has no plans to halt or slow deportations, despite pleas from advocates. Obama gave interviews to two Spanish-language outlets, Univision and Telemundo, on Wednesday, the day after he delivered a major speech on immigration reform. He argued that much of the legislative work on the issue is already done, given years of work by a number of members of Congress and his own administration. Now, the struggle is about convincing lawmakers to sign on, he told Telemundo's José Díaz-Balart. – Elise Foley

Leading Politico: A résumé check: Is Chuck Hagel up to the job?
There’s not much on Chuck Hagel’s résumé that screams secretary of defense. He’s not a former White House chief of staff, like Dick Cheney or Donald Rumsfeld. He never ran the CIA, like Leon Panetta or Robert Gates. He never worked inside the Pentagon. There’s one main job on his résumé — politician — and for Hagel, that’s the problem. – Stephanie Gaskell

Leading The New York Times: At Confirmation Hearing, Hagel Offers Forceful Endorsement of U.S. Military Power
Chuck Hagel, President Obama’s nominee to be secretary of defense, on Thursday morning said that the United States must lead other nations in confronting threats, use all tools of American power in protecting its people and “maintain the strongest military in the world.” In an opening statement at his Senate confirmation hearing, Mr. Hagel presented a broad, forceful endorsement of American military power aimed at answering critics who say he would weaken the United States. He offered strong support for Israel, said he was fully committed to the president’s goal of preventing Iran from obtaining nuclear weapons and said he would keep up pressure — through Special Operations forces and drones — on terrorist groups in Yemen, Somalia and North Africa. – Elisabeth Bumiller

- Menendez watch gets more interesting; Dems become mum -
PRESS SECRETARY JAY CARNEY AT THE WHITE HOUSE:
Reporter: There have been reports regarding Senator Bob Menendez. I’m curious if the president has full faith and confidence in the senator?
Carney: I’ve seen those reports. I don’t have anything for you on it.
Reporter: Does he have full faith and confidence…
Carney: I just don’t have anything …
Reporter: because he plays a key role on immigration and obviously…
Carney: Again, I just haven’t – I don’t have anything for you on those reports.
SENATE MAJORITY LEADER HARRY REID AT A PRESS CONFERENCE ON CAPITOL HILL: “Menendez is my friend, he's an outstanding senator, he's now the new chair of the Foreign Relations Committee. Any questions in this regard direct to him, I don't know anything about it.”

Gut Check Full Service: Sen. Robert Menendez denies improper travel and hiring prostitutes… Sen. Robert Menendez's office issued a statement Wednesday saying he had traveled several times on a plane belonging to a Florida eye doctor who had given political donations to Menendez but that all the trips were "paid for and reported appropriately." The office also denied allegations the New Jersey Democrat had engaged the services of prostitutes. The statement was issued after FBI agents searched the West Palm Beach office of the ophthalmologist, Dr. Salomon Melgen. Investigators were seen carrying out boxes during the search, which began Tuesday night and continued into Wednesday. An FBI spokesman in Florida confirmed there was "law enforcement activity" at the location where the search occurred but did not mention Melgen or anyone else and did not explain what agents were investigating. – Carol Cratty, Susan Candiotti and Ross Levitt VIDEO

- Defending Hagel, Manchin indicts the Senate -
DEMOCRATIC SEN. JOE MANCHIN OF WEST VIRGINIA AT CHUCK HAGEL’S HEARING: “Everybody's been so fixated on your past, what you've said, and I think you've, I've come to learn in the very short time that I've been a senator that this process and this body has become almost guilt by conversation. With that being said, I respect you, being the person to be able to say what you thought needed to be said, you voted the way you thought, you should be voting for your constituents and your country, and you aren't really driven by your party or by any pressure groups. I can't tell you how much I wish I served with you.”

- What does Biden make of Hagel, Kerry criticism? -
VICE PRESIDENT JOE BIDEN IN AN EXCLUSIVE INTERVIEW WITH CNN’S GLORIA BORGER: “Where have they been for four years? The real President Obama has exercised force responsibly as - as boldly and as bravely as any president in American history. This is the guy who's not backed away. And he's also ended wars that almost every military man out there will tell you we should not be engaged in again. The idea of getting engaged in a ground war in a country that's in transition is not a prescription any military man would suggest. And to suggest that two - two war heroes, one with a Bronze Star, a medal - a - a Purple Heart, Silver Star, taking over both the foreign - excuse me - the State Department and Defense, is a dove - or - or whatever the phrase was, is, um, is - is ridiculous.”

- State responds to Chinese hacking -
PETER VELASCO, A STATE DEPARTMENT SPOKESPERSON, IN A WRITTEN PRESS RELEASE: “We have seen the reports of Chinese hackers attacking The New York Times website. The United States has substantial and growing concern about the threats to economic and national security posed by cyber intrusions, including the theft of commercial information. We have repeatedly raised our concerns with senior Chinese officials, including military officials, and we will continue to do so. The New York Times’ experience mirrors that of individuals and organizations across the U.S. government and private sector. We encourage the sharing of these experiences in order help increase public awareness of these threats to U.S. security. We encourage all U.S. firms and companies to take this opportunity to review their cyber-security practices and strengthen their network defenses.”

- Senate farewell speeches – a form of torture? -
JAY LENO ON HIS LATE NIGHT TALK SHOW: “The senate has overwhelmingly approved John Kerry as the next secretary of state. Well, in his farewell speech today to the senate, Kerry spoke for 51 minutes. 51 minutes. So, apparently he does believe in torture.”

Starting in 1968, a year of intense fighting during the Vietnam War, infantryman Chuck Hagel and his brother Tom became the first known American siblings to serve in the same infantry squad in Vietnam.

According to an account of their time together by Salon, Chuck, the older brother, and Tom, the younger, "walked point together, they watched comrades get ripped in half by land mines, and they sent five Purple Hearts home to their mother. They also saved each other’s lives."

Tom first saved Chuck's life when a mine explode in front of them and lodged a large piece of shrapnel into the older brother’s chest. Though Tom was hit as well, he ignored his own wounds and frantically wrapped his brother. Just a short month later, Chuck dragged the unconscious Tom out of a burning vehicle just before it blew up.

When announcing Chuck Hagel's nomination to be Secretary of Defense, President Barack Obama mentioned the uniqueness of two brothers serving with one another.

"As a young private, and then a sergeant, he served with honor, alongside his own brother," Obama said. "When Chuck was hit by shrapnel, his brother saved him. When his brother was injured by a mine, Chuck risked his life to pull him to safety. To this day, Chuck bears the scars — and the shrapnel — from the battles he fought in our name."