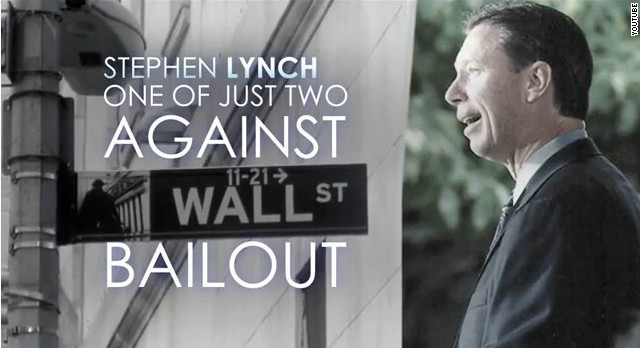 Lynch, a social conservative from South Boston, launched his campaign with a web video that touts his blue collar roots.
January 31st, 2013
11:43 AM ET

It's now a race for Kerry's seat

Rep. Stephen Lynch announced his bid Thursday for the U.S. Senate in Massachusetts, becoming the second candidate to jump into the June special election to fill the final eighteen months of the term of longtime Democratic Sen. John Kerry, who steps down from the Senate at the end of the week to become secretary of state.

Lynch, a social conservative from South Boston, launched his campaign with a web video that touts his blue collar roots.

The congressman, who last November won re-election to a seventh term, will make his official announcement later Thursday at an iron workers union hall in South Boston.

His video is full of populist themes, like his pushing back against moves to privatize Medicare and Social Security and his opposition to the controversial "Troubled Asset Relief Program," better known as TARP or the Wall Street bailout. The narrator in the video says Lynch was "one of just two Massachusetts representatives to vote against the $700 billion Wall Street bailout because it did everything for Wall Street and nothing for the people they hurt."

Markey voted in favor of TARP. The liberal congressman, who's the longest serving member of the Bay State's congressional delegation, has been backed by the Democratic Senatorial Campaign Committee, and enjoys the support of Kerry and Vicki Kennedy, the widow of the late Ted Kennedy.

Markey welcomed Lynch to the race, saying in a statement that "I urge him to join me in committing to the people's pledge to prevent outside special interests groups from injecting millions into this campaign. Time and again, I've stood up to big oil, Wall Street and the gun lobby and this race should be about the people of Massachusetts having a voice in the Senate, not the special interests."

The Democratic primary will be held on April 30, with the general election coming on June 25.

On the Republican side, the big question is whether former Sen. Scott Brown will make a bid to return to the Senate, or instead run for governor in 2014?

"Brown is still in the process of deciding and discussing it with his wife and family. No talk on timing yet," said a GOP strategist in Massachusetts close to Brown, who insisted on anonymity to speak more freely, told CNN earlier this week.

Another source close to Brown told CNN that "he is still undecided. But he knows that he has got to make a decision quickly."

Whoever wins the June special election would serve the final year and a half of Kerry's term and would then have to run again in 2014 for a full six-year term in office.