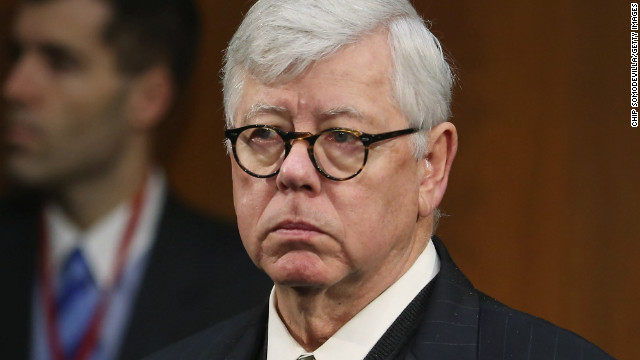 Washington (CNN) - National Rifle Association President David Keene signaled Thursday that Senate Majority Leader Harry Reid, a Democrat who has enjoyed the powerful gun lobby's support in the past, could prove pivotal in the heated debate over gun control.

Reid has found himself in a delicate position as he tries to navigate the desires of many members of his pro-gun rights Nevada constituency and the White House and members of his caucus' intensified push over gun control. As Senate majority leader, Reid has great influence to speed or slow the consideration of legislation on Capitol Hill.

"He's under incredible pressure right now because he's got, as any member of Congress or senator does, he's got his own beliefs. He's got the views and the demands of his constituents on the one hand and the pressure he faces from party leaders and his president on the other," Keene told journalists at a Christian Science Monitor sponsored breakfast Thursday. "So where Harry Reid ends up in this debate is anybody's guess and I think that's one of the guessing games that's going on around Washington now."

Reid has twice opposed the assault weapons ban back in 1992 and 2004, has a B rating by the NRA for his pro-gun rights voting record and since 2008 has received just shy of $8,450 from several gun lobbies according to an analysis of campaign contributions from the Center for Responsive Politics.

The NRA has also previously supported Reid in his primary races, but Keene said he has not spoken personally with Reid about the recent back and forth over gun control legislation.

The nation's top Democrat in Congress has faced scrutiny in recent weeks for his close ties with the National Rifle Association. Reid slipped a provision into the 2010 national health care law that restricts the government from collecting data on gun ownership, as reported by CNN's National Political Correspondent Jim Acosta.

On the other side of the debate, fellow Democrats including a group led by California's Dianne Feinstein, proposing a ban on semi-automatic rifles and ammunition magazines exceeding 10 rounds, argue that restricting access to such firepower and expanding background checks to as many gun sales as possible will help.

Reid has not said how he would vote on that measure but would work to ensure a variety of gun control legislation is brought to the floor of the full Senate for consideration.

"…We're going to have votes on all kinds of issues dealing with guns and I think everyone would be well-advised to read the legislation before they determine how they're going to vote for it," Reid told reporters this week.

"Law-abiding gun owners will not accept blame for the acts of violent or deranged criminals, nor do we believe that government should dictate what we can lawfully own and use to protect our families," Pierre said.

The first congressional hearing since last month's Newtown, Connecticut school massacre hearing was also marked by the appearance of former U.S. Rep. Gabrielle Giffords who was shot in the head by a gunman at a political event two years ago.

"Too many children are dying. Too many children. We must do something," Giffords said in a rare public appearance Wednesday, reading a statement that acknowledged her injuries made it difficult to speak. "It will be hard, but the time is now," she told the packed hearing held by the Senate Judiciary Committee.

Keene said his group has reason to believe otherwise.

"I think that our opponents' hope (has changed)," Keene said. "They hope that they can use emotion to achieve an anti-firearms agenda that they haven't been able to achieve in the past. But my suspicion ... (is that) people are smarter than politicians and that common sense ultimately prevails. I am convinced that as these things are discussed, that we're going to come out about where we have come out in the past."