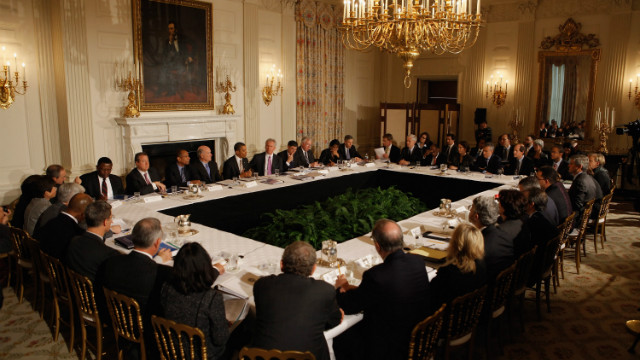 The Council on Jobs and Competitiveness was created in January 2011 by executive order, and its charter mandated that it would expire after two years. A White House official said Thursday that the council's charter would not be renewed.

While the unemployment rate has fallen from 9.1% in January 2011 to 7.8% last month, more than 12 million Americans remain out of work, a figure that both Democrats and Republican say is too high.

The news also comes the day after a Commerce Department report showed the U.S. economy contracting for the first time in more than three years. Gross domestic product, the broadest measure of the nation's economic growth, contracted at an annual rate of 0.1% from October to December, the report said. It was the first quarterly contraction since the second quarter of 2009, amid the so-called "great recession."

The White House official said Thursday the plan had always been to disband the jobs council after two years, just as the president's Economic Recovery Advisory Board broke up after its two-year charter expired in 2011.

According to the White House website, the last time the jobs council met was over a year ago, on January 17, 2012. The infrequency of the meetings became fodder for Obama's rival on the presidential campaign trail.

"In the last six months, he has held 100 fundraisers," GOP presidential nominee Mitt Romney said in July. "And guess how many meetings he's had with his jobs council? None. Zero. Zero, in the last six months. So it makes it very clear where his priorities are."

Romney and other Republicans criticized the council as merely a tactic to appear focused on job creation, rather than actual commitment to any ideas coming from the private sector. On Thursday, Republicans continued those complaints as the White House moved to end the panel.

"To understand the abysmal nature of our economic recovery, look no further than the president's disinterest in learning lessons from actual job creators," Brendan Buck, a spokesman for House Speaker John Boehner, wrote in a statement. "Whether ignoring the group or rejecting its recommendations, the president treated his Jobs Council as more of a nuisance than a vehicle to spur job creation."

The White House official said the council's recommendations "were considered in the context of the President's broader economic policy and job creation agenda, and while we didn't agree with every one of their ideas, most of their recommendations were acted on by the administration."

The official pointed to green building initiatives, a new website for the Small Business Administration, and boosts to tourism programs as examples of the president acting on suggestions from his jobs council.

The White House has long struggled to make and keep in the business community, thanks to contentious policy fights over financial and health care reforms. Obama famously dubbed Wall Street as "fat cat bankers" and bashed health insurers for raising premiums and denying coverage.

The tension grew worse during the election, when business groups doubled down their contributions to defeat Obama. The financial sector spent more $50 million supporting the Romney, according to the Center for Responsive Politics.

The White House official said Obama would begin a new effort for business outreach in his second term that would expand upon the priorities promoted by the jobs council, including promoting entrepreneurship and small business.

The official also said the White House had been in contact with business leaders since November's election, including on Wednesday, when senior aides held a call with top executives to discuss the latest push for immigration reform. Former AOL CEO Steve Case, Motorolla's Greg Brown, General Motors Dan Akerson and Deloitte's Joe Echevarria were all on the call, the official said.