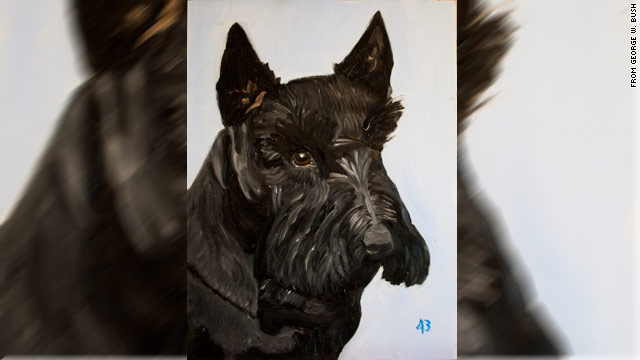 (CNN) - President George W. Bush's Scottish Terrier Barney has died, the former president said in a statement Friday. He was 12 and had been suffering from lymphoma.

But Barney lives on, in a sense.

Bush painted an oil portrait of his pup, which his office posted online Friday. Within a half hour, it had drawn nearly 500 likes on Facebook, as well as condolence messages for the former first family.

He signed the painting 43, his presidential number.

"Barney was by my side during our eight years in the White House," Bush said in a statement. "He never discussed politics and was always a faithful friend. Laura and I will miss our pal."

"Barney and I enjoyed the outdoors. He loved to accompany me when I fished for bass at the ranch. He was a fierce armadillo hunter. At Camp David, his favorite activity was chasing golf balls on the chipping green," Bush wrote.

Barney arrived in the White House along with Bush and his staff in 2000. He was a gift to first lady Laura Bush whose birthday is November 4.

He starred in the Bush White House Christmas videos, known as Barney Cam, and was carried aboard presidential aircraft by the president himself. He once nipped a reporter's finger.

The family's other pups included Miss Beazley, another gift to the first lady from her husband and Barney's niece, and Spot, who was the offspring of President George H.W. Bush's dog Millie.