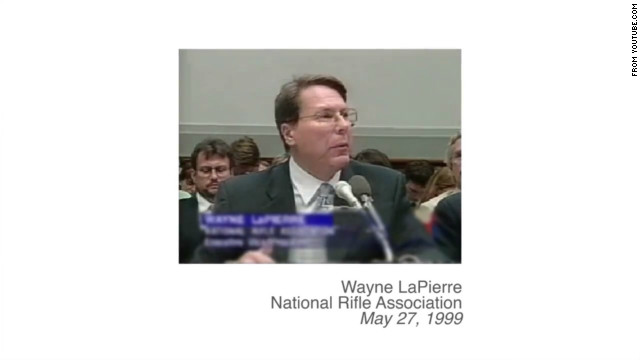 The spot appears designed to put pressure on Washington and the National Rifle Association to support background checks on all gun purchases. It is part of the group's campaign to "demand a plan" to prevent gun violence.

"The NRA once supported background checks," says a child in the ad. Later, the message appears on screen: "Background checks for all gun purchases. It's time."

NRA Executive Vice President Wayne LaPierre told legislators at a Capitol Hill hearing this week that the current background check system is flawed and the requirements should not be expanded.

Currently, background checks are required under federal law on gun sales made by federally licensed dealers. One reason not to expand gun regulations, he and others said, is because those intent on breaking the law would not follow increased regulations, which would serve only to inconvenience law-abiding individuals.

Proponents of universal checks say the system would be more effective if it was required of all sales, including those made by one individual to another and those currently exempted by the so-called gun show loophole. Opponents say it would overburden the system and place an excessive burden on private sales.

Some estimates say four in 10 guns are sold without a background check.

Recent polls have shown background checks are among the most popular of the proposals circulating Capitol Hill right now. Other proposals include an assault weapons ban and limiting the capacity of gun magazines.

LaPierre took a different position on background checks in his 1999 congressional testimony, as is shown in the ad: "We think it's reasonable to provide mandatory, instant criminal background checks for every sale at every gun show. No loopholes anywhere. For anyone."

The new ad features stock photos and an audio track of children, which has been a sometimes-controversial element of recent gun violence messaging.

The NRA was roundly criticized for an ad that asked, "Are the president's kids more important than yours" and noted the security in place at their school. That ad continued: "Then why is he skeptical about putting armed security in our schools, when his kids are protected by armed guards at their school?"

President Barack Obama incorporated children into his own appeal for gun control measures when he sat before cameras and signed executive actions while four children who had written to him on the issue stood behind him.

Each of these appeals comes after mass shooting at an elementary school in Newtown, Connecticut which killed 20 five- and six-year olds.

Bloomberg's group did not disclose the size of the buy, but said it would air in the select market "in the third-quarter break coming out of halftime."

But this localized purchase means the group likely isn't laying out the record-setting $4 million that a nationwide 30-second ad sells for this year.