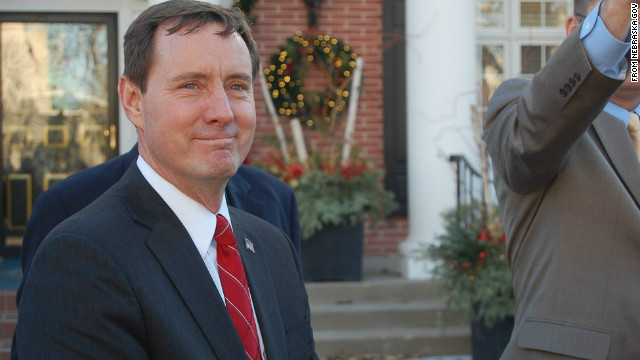 The Omaha World-Herald reported it had uncovered around 2,000 calls to four women. The calls were “long conversations held in the wee hours of the night,” according to the paper, which said it had requested records related to the calls.

Gov. Dave Heineman told reporters he accepted Sheehy’s resignation on Saturday morning and that it was “effective immediately.”

“Late yesterday we became aware of new information regarding the lieutenant governor's personal decisions and subsequently had a conversation with him,” Heineman said.

“I had trusted him and that trust was broken,” he told reporters.

CNN’s attempts to reach the governor through his office, assistant, and the governor’s office were unsuccessful.

Sheehy said the split involved a “personal family matter,” according to the World-Herald, and that he had no plans to leave his job or quit his campaign.

Heineman had previously endorsed Sheehy’s bid to succeed him when their term expires in 2015. CNN affiliates KMTV and KETV reported Heineman was withdrawing his endorsement and doubted Sheehy’s campaign would continue.

John Hibbing, a political science professor at the University of Nebraska-Lincoln, told CNN this means the “race has been turned completely upside down.”

“He was a little bit under the radar and Gov. Heineman was calling the shots,” Hibbing said. “He’s been the Nebraska equivalent of the vice president.”

Sheehy’s chances to win the governor’s seat looked good, Hibbing said, after the former legislature speaker Mike Flood withdrew from the race citing his wife’s cancer. With the GOP field now empty, he says Attorney General John Bruning or state legislator Charlie Janssen may run. Bruning ran for the U.S. Senate last year and drew attention as one of several attorneys general who sued the Obama administration over the health reform law.

Hibbing said Sheehy’s resignation could also open the door for a Democrat to win the gubernatorial race, which “would be quite an upset.”

Heineman had served as lieutenant governor under Gov. Mike Johanns, who resigned in 2005 to join President George W. Bush’s Cabinet. Heineman became governor and appointed Sheehy his lieutenant. The two were elected to full four-year terms in 2006 and 2010.

Sheehy recently served a term as chairman of the National Lieutenant Governors Association. Before his appointment as lieutenant governor, Sheehy was a mayor and rose through the ranks of an ambulance company where he worked for 20 years, according to his state biography.

The lieutenant governor’s duties include presiding over the state’s legislature, which is the nation’s only unicameral – single-body – legislature.

KETV described the resignation as “startling” and the World-Herald described it as “abrupt.”

Heineman said he would “begin the process of filling the office of lieutenant governor on Monday.”