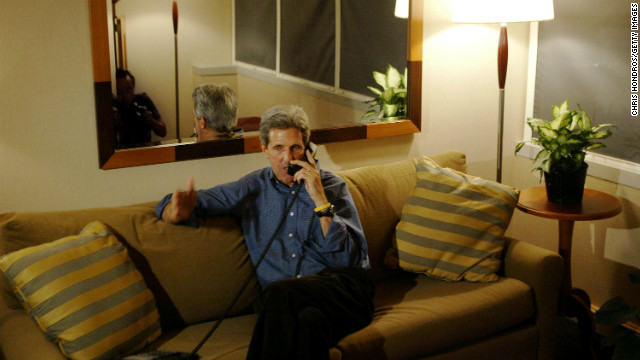 When did Kerry become Obama's choice to replace Clinton?

(CNN) - Sen. John Kerry found a smooth road to confirmation as secretary of state capped by an overwhelming 94-3 vote in the Senate.

It was a road made smoother when another top prospect for the job, veteran diplomat Susan Rice, withdrew her name from consideration in mid-December amid Republicans' tough criticism of her.

But was Kerry President Barack Obama's choice to lead the State Department before Rice bowed out? He suggested as much in a recent interview with The Boston Globe, then dialed back his comments after reporters noted they contradicted the account given by Obama's spokesman.

Kerry, a Massachusetts Democrat, described to The Globe a conversation between he and Obama - a talk he says took place when Rice was considered by many political analysts to have Obama's support for the post.

"He called me, actually a week before Susan [Rice] got out of the thing," the paper quoted Kerry as saying.

Rice withdrew her name on December 13 and elected to remain U.S. ambassador to the United Nations. She told Obama in a letter that day "the confirmation process would be lengthy, disruptive, and costly - to you and to our most pressing national and international priorities. That trade-off is simply not worth it to our country."

The next day, White House Press Secretary Jay Carney told reporters, "The president had not made a decision about his next secretary of state."

But, by Kerry's account in The Globe, he had already been offered the job.

After the comments were published in The Globe, Kerry issued a statement to Reuters which said: "Private discussions are best kept private and my imprecise, overly casual answer to a question about timing confused things."

"To clarify, through many private conversations over a long and busy period for everyone, I knew that the president was interested in the possibility of my serving as secretary of state but the president did not formally offer me the job until later in December," he said.

White House Press Secretary Jay Carney declined to comment Friday on a conversation such as the one Kerry described.

"Who is right here, you or Kerry?" a reporter asked.

"Well, I would simply say that I'm not going to read out specific conversations," Carney replied. "I speak for the president, and the president, when he makes a decision, announces it. And that was the case."

Republicans had hammered Rice for months over her characterization of the attack that killed four Americans, including U.S. Ambassador Christopher Stevens, on September 11, 2012, in Benghazi, Libya. Rice appeared on several television programs and described the attack as a spontaneous riot sparked by an anti-Islam film; the Obama administration later characterized it as terrorism. She based her comments on unclassified talking points developed by the intelligence community, and noted their understanding of the events changed over time as more information became available.

Carney said in December that Rice withdrew her name of her own initiative, rather than at the request of the White House.

He took the opportunity on Friday to blast "the really absurd obsession for political purposes by critics on Capitol Hill on the talking points provided for appearances on a Sunday show with regards to the attack."

After Kerry was confirmed for the top diplomatic job, Rice praised him for having worked in the Senate "tirelessly and effectively to advance U.S. interests and values around the globe.

"I have been honored to work with him in the past, and I look forward to working closely with him again on President Obama's national security team," she said.

But regardless of when Obama communicated or arrived at his decision, Kerry stepped down from his Senate seat and was sworn into his new post on Friday afternoon.