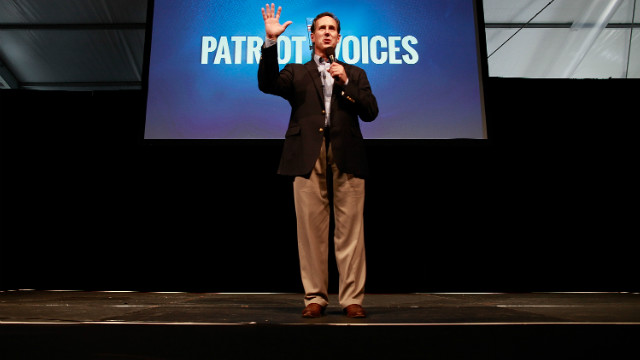 Santorum says scouts may not survive if gays allowed

His column, published online on the right wing website World Net Daily, comes as the Boy Scouts of America prepares to discuss changing their longstanding national ban on gay scouts and scoutmasters at an upcoming meeting.

Removing that ban is "another example of the left attempting to remove God from all areas of public life," Santorum alleged in his op-ed, pointing to a "long list of liberal victories" that he said included abortion, affirmative action and "sexual liberation."

"Scouting may not survive this transformation of American society, but for the sake of the average boy in America, I hope the board of the Scouts doesn't have its fingerprints on the murder weapon," he wrote.

The potential change to the Scouts' rules follows protests after a den leader was forced out of her post because she is openly gay. The organization made no changes to their policies on gay membership after a recent lengthy internal review, but the issue is expected to resurface at a meeting this month.

One possible change to national policy would allow local chapters to determine whether to accept gay members. If the national board approved that measure, individual troops could dictate membership "consistent with each organization's mission, principles, or religious beliefs," according to a statement last week.

That alteration of policy would be equally devastating, Santorum wrote, since troops that maintain their ban on gay scouts would no longer be protected from legal protection against civil lawsuits. He also predicted those troops hoping to preserve the ban would simply leave the organization altogether.

"Many will simply leave and pursue alternative ways to continue to invest in the development of their young men's character, leaving the Scouts hollowed out at its core," he wrote.

The former GOP presidential candidate also identified a socio-economic divide in the debate over allowing gay boy scouts, asserting the wealthy CEOs who comprise the Boy Scouts' board would be shielded from the negative effects of lifting the ban.

"It makes sense that men at the top of the food chain whose boys are insulated, although not immune, from the harmful effects of societal change are behind this effort," he said.

Rick Perry, the Texas governor and another former GOP presidential candidate, weighed in against the ending the ban on Saturday, telling a statewide gathering of scouts that "most people see absolutely no reason to change the position and neither do I."

"Scouting is about teaching a substantial amount of life lessons," Perry, an Eagle Scout, said. "Sexuality is not one of them. It never has been; it doesn't need to be."