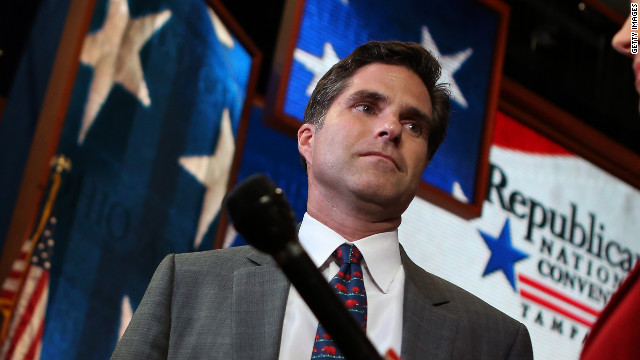 (CNN) - Tagg Romney, the son of former Republican presidential nominee Mitt Romney, announced Monday that he will not run for the special Senate election in Massachusetts.

"The timing is not right for me, but I am hopeful that the people of Massachusetts will select someone of great integrity, vision, and compassion as our next US Senator," Romney, 42, said in a statement.

A source close to the Romney family told CNN earlier Monday that Romney was "thinking about it, but it's unlikely."

He would have run as a Republican in the race to replace former Sen. John Kerry, who left the seat to become U.S. secretary of state. Romney said he was "humbled by the outreach" he received this weekend, encouraging him to run–shortly after former Sen. Scott Brown, who was ousted from his own Senate seat in November, announced Friday he would not run for Kerry's vacant spot.

Romney, who started the venture capital firm Solamere Capital after his father's 2008 bid for the GOP nomination, advised his father in both that bid and in the 2012 presidential campaign. Mitt Romney lost his home state by 23 points to President Barack Obama in last November's election.

"I love my home state and admit it would be an honor to represent the citizens of our great Commonwealth," he said. "However, I am currently committed to my business and to spending as much time as I can with my wife and children."

With Romney's decision against running, the GOP has yet to find a candidate to run for the June election. Former Republican Gov. William Weld also announced Monday he wouldn't run, and state Senate Minority Leader Richard Tisei said Saturday he would sit out the election.

On the Democratic side, longtime Rep. Ed Markey and Rep. Stephen Lynch, a conservative Democrat, have both thrown their hats in the ring.

Democratic Gov. Deval Patrick announced that a trusted former aide was his choice to serve as an interim replacement for Kerry until the election. Patrick named William "Mo" Cowan, his former chief of staff, as senator.