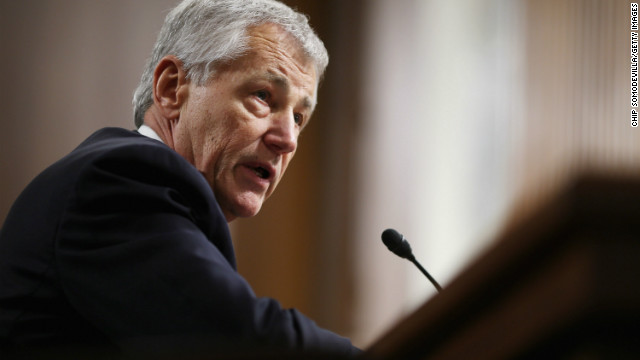 Instead, he wants President Barack Obama to do that for him.

The South Carolina Republican issued a statement Tuesday morning saying he hoped the "Obama administration will reconsider his nomination."

Late Monday, he described Hagel's appearance last Thursday before the Senate Armed Services Committee - on which Graham sits - as less than "confidence-inspiring." Republicans on the committee peppered Hagel with critical questions about his past position on negotiations with Iran over its nuclear question, statements some have thought suggested he was not an ardent supporter of Israel, and other issues.

So far, no Republicans have stepped forward with a commitment to filibuster Hagel's confirmation.

It would be unprecedented for one to do so.

While filibusters of presidential nominations have been threatened before, Betty Koed of the Senate Historian's Office told CNN on Monday that a Cabinet nominee has never faced a formal filibuster which required 60 votes to break, a higher threshold than for confirmation.

Sen. John McCain said Monday he would not support a filibuster of Hagel. McCain is also a member of the Armed Services Committee, an ally of Graham and formerly a close friend of Hagel.

"I don't think it's appropriate and I would oppose such a move," McCain, R-Arizona, said.

Another tactic would be for a senator to put a hold on Hagel - something any member of the body can do - which would delay any confirmation vote.

Sen. James Inhofe, R-Oklahoma, addressed that tactic on Monday, telling reporters he did not "know anyone who's saying that now or who's committed to it or committed against it."

"Chuck Hagel is a good man, but these are dangerous times. What kind of signal are we sending to the Iranians when our nominee for Secretary of Defense seems clueless about what our policy is?" his statement said.