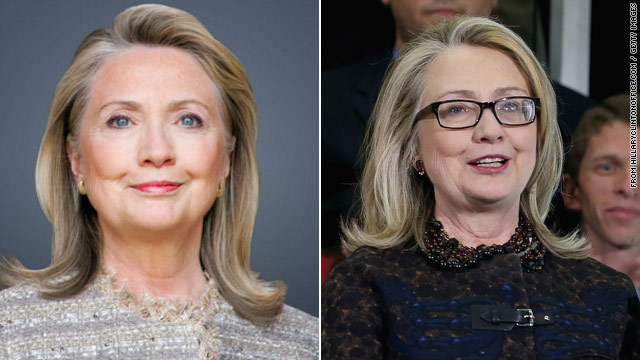 An attention-grabbing photo of Clinton - without the glasses she has worn since her recent concussion - boldly sits atop a new website, HillaryClintonOffice.com, which was registered on January 31 as she left her post as secretary of state last week.

Only further stirring the speculation: visitors to her old campaign website, HillaryClinton.com, are offered a link to the new website "to reach the Office of Hillary Clinton."

A source close to Clinton said the site was created to help people contact her with questions and scheduling requests now that she is no longer in her government post.

The new online presence is sparse: besides the attention-grabbing photo, there's a form to contact Clinton and the site's privacy policy. The photo, a separate source said, was not a professional portrait but a picture which Clinton liked.

While the purchasers of domain names are generally available publicly, this site was purchased through a service allowing the purchaser to remain anonymous.

Her original site HillaryClinton.com, which links to the new site, is funded by Friends of Hillary, which is the remaining shell of her 2000 Senate campaign.

Even though the next race for the White House is a long way away, there's already intense speculation over whether Clinton will make a second bid for president.

When asked last week at a global town hall if she was thinking of making another run for the White House, Clinton said "I am not thinking about anything like that right now."

As to what that next chapter would be, Clinton gave a hint, saying "I don't know everything I'll be doing. I'll be working on behalf of women and girls, hopefully writing and speaking, those are the things that I'm planning to do right now," she added.

But two things - there was a partisan divide in both polls - with only a minority of Republicans giving her the thumbs up –and if she becomes a politician again - she could see those sky high numbers come down a bit.

- CNN's Elise Labott and Peter Hamby contributed to this report