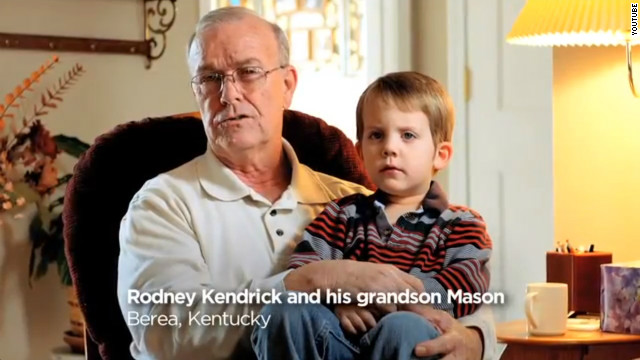 The spot, from the Progressive Change Campaign Committee, will run on broadcast and cable television in McConnell's home state, as well as in Washington, D.C., including on CNN. The group said they would spend $27,000 initially to air the ad for one week.

It features Rodney Kendrick, a Kentucky gun owner who takes McConnell to task for his opposition to gun control measures like a ban on military-style assault weapons.

"I was born and raised right here in Kentucky," Kendrick says in the spot. "I served my country as a marksman and we were trained to use guns safely. It's unthinkable that guns meant for war could be used on civilians and children. As a gun owner and a veteran, I support the plan to ban assault weapons and keep guns out of the wrong hands, because I know these guns. I know what they can do."

"Sen. Mitch McConnell has taken thousands of dollars from gun manufacturers, and he opposes common sense reforms," he continued. "Senator McConnell, whose side are you on?"

McConnell, who is serving his fifth term in the Senate, faces re-election next year, and is hoping to fend off any possible conservative primary challenges. Actress Ashley Judd has been mentioned as a potential Democratic rival.

Responding to the ad, McConnell's spokesman Jesse Benton said the minority leader predicted "that protecting Kentucky from President Obama's gun control agenda would result in a flurry of attack ads from left-wing groups."

"It's no secret to Kentuckians that Leader McConnell is a stalwart supporter of their Second Amendment rights and George Soros funded commercials aren't going to change that," he continued.