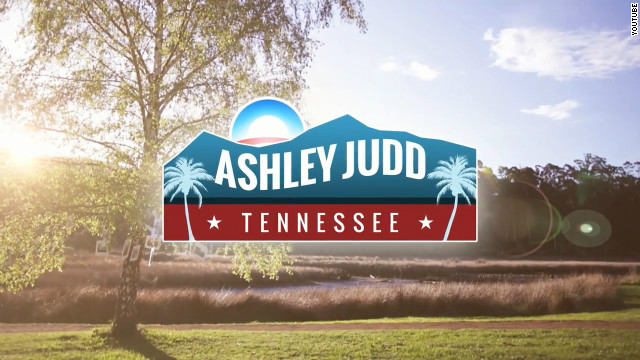 (CNN) – She's not yet a candidate for any public office, but actress Ashley Judd already has an outside group creating an attack ad casting her as out of touch from her years in Hollywood.

The web spot, from American Crossroads, comes as Judd openly speculates about a 2014 run for U.S. Senate in Kentucky, where she'd potentially be pitted against Senate Minority Leader Mitch McConnell. American Crossroads is the pro-Republican super PAC co-founded by Karl Rove. They said they were spending $10,000 to place the ad online.

"You know what this country really needs?" a sarcastic narrator begins. "An independent voice – for Obama."

Clips of Judd are dropped into the narration, including a soundbite of the actress saying, "I am committed to President Obama and Vice President Biden. He is a brilliant man. He is now able to flower more as the president I knew he could be."

The spot also pokes fun at Judd saying: "And it just clicked. Tennessee is home." The clip rewinds and plays again, with the word "Kentucky" dubbed over Judd's praise of neighboring Tennessee.

While Judd comes from a family with deep roots in Kentucky, she moved to Tennessee early in her career.

"Ashley Judd: an Obama following, radical Hollywood liberal who's right at home here in Tennessee. I mean Kentucky," the narrator says as the spot concludes.

While Judd has yet to officially announce that she's running for Senate in Kentucky, the contest is still more than a year away. She was an active supporter of President Barack Obama's during his re-election campaign, speaking at the Democratic National Convention, and taking part in inauguration celebrations in January.

At one of those celebrations, she told the Courier-Journal of Louisville that she was "taking a close look" at a Senate bid, but that she had yet to make a final decision.

"The people of Kentucky need a fighter," Judd told the newspaper on her way to the Kentucky Society of Washington's Bluegrass Ball. "And certainly going back 10 generations, I've got some fighters from those hills in my family."