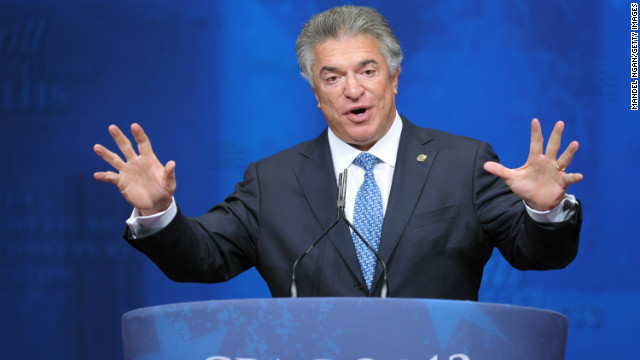 Washington (CNN) - It's something Al Cardenas hopes he never has to do: Choose between two good friends.

But that's the dilemma the chairman of the American Conservative Union could face if Sen. Marco Rubio of Florida and former Florida Gov. Jeb Bush both decide to run for the White House in 2016.

"I'd love them both. They're probably the two politicians I know the best, and go back with the best. I'd love for either one of them to run and I'd hate for both of them to run," Cardenas tells CNN.

Rubio is one of eight senators pushing for a bipartisan solution on immigration reform and Cardenas says his friend's involvement has "left the door open for conservatives to fit comfortably in the discussion on these issues. We'll see where it ends up but at least he opened the door to people to be willing to participate in those discussions. I don't know if anyone else would have been able to do that. So that's why it's remarkable that he's willing to spend so much political capital so early in this journey in order to accomplish something like this. Because he knows very well that the outcome of this immigration package is far from predictable. And so I'm proud of him.

Cardenas was born in Cuba. He served two terms as the chairman of the Republican Party of Florida, the only Hispanic to lead the GOP in the Sunshine State. He thinks an agreement on immigration reform and border security can be worked out.

Immigration reform is a top issue for President Barack Obama, and many Republicans once opposed to reform efforts may be coming around, following a dismal performance among Latino voters by last year's GOP presidential nominee Mitt Romney. According to national exit polls, Romney captured just 27% of the Latino vote in the November presidential election, down from the 44% George W. Bush won eight years earlier.

Cardenas is not pleased with those who are already criticizing immigration reform efforts.

"I do know that the current status is unacceptable. So how can anybody argue to me that they're unwilling to enter into that journey and see where it ends up. And so I have very little appetite for those contrarians who criticize the idea at the beginning of the journey and don't bother to offer any ideas or thoughts or fixes on their own. To me that's just political posturing and not elevating the discourse on something important that should be. This is not a time to pander on the issue, it's a time to deal with it responsibly," said Cardenas.

Cardenas, a Bush-Cheney 2004 campaign co-chairman and top lawyer and lobbyist, took over as ACU chairman two years ago. The group describes itself as the oldest and largest grassroots conservative organization in the country. And it's the organization that each year puts on the Conservative Political Action Conference, better know as CPAC.

The event is the largest annual gathering of conservative leaders and activists. It's a popular cattle call for Republicans considering bids for the White House and it has boosted the presidential campaigns, or ambitions, of many candidates.

The annual CPAC GOP presidential nomination straw poll is considered a key gauge of conservative sentiment, and garners much media attention. But there's been some criticism in recent years that the straw poll is not the indicator that it once was.

Last year, for the first time, there was not only a straw poll of activists attending the conference, but also national survey of conservative voters conducted by CPAC organizers.

For years the conference, which turns 40 this year, was held at the Marriott Wardman Park hotel in the nation's capital. But CPAC outgrew the old location, which Cardenas touts as another indicator that the conservative movement is alive and well. It will be held this year for the first time at the Gaylord National Resort and Convention Center just outside Washington, in Prince George's County, Maryland.