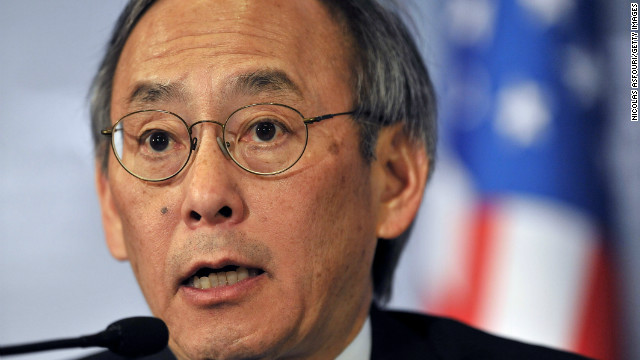 (CNN) - Outgoing Energy Secretary Steven Chu wants you to know he isn't stepping down because of a saucy scandal.

Especially not one "reported" this week by the sarcastic mock newspaper The Onion.

"Chu awoke Thursday morning to find himself sleeping next to a giant solar panel he had met the previous evening," cracked wise the paper, adding that Chu was accompanied by a "partially blanketed 18-square-foot photovoltaic solar module whose manufacturer he was reportedly unable to recall."

"According to sources," the Onion speculated, "Chu's encounter with the crystalline-silicon solar receptor was his most regrettable dalliance since 2009, when an extended fling with a 90-foot wind turbine nearly ended his marriage."

In Washington, where affairs can end careers, the tradition is to vehemently deny impropriety.

Even when it is made up by a newspaper nobody takes seriously.

"I just want everyone to know that my decision not to serve a second term as energy secretary has absolutely nothing to do with the allegations made in this week's edition of the Onion," Chu wrote in a statement responding to the concocted story he posted to Facebook.

"While I'm not going to confirm or deny the charges specifically, I will say that clean, renewable solar power is a growing source of U.S. jobs and is becoming more and more affordable, so it's no surprise that lots of Americans are falling in love with solar," he teased.

Chu noted an increase in solar technology use in a letter announcing his resignation to energy department staff, and President Barack Obama said under Chu the U.S. has "doubled the use of renewable energy, dramatically reduced our dependence on foreign oil, and put our country on a path to win the global race for clean energy jobs."

But Chu also led the Energy Department when it backed over $500 million in financing to the solar panel manufacturer Solyndra, which later went bankrupt at a loss to taxpayers. Republicans used it against Obama as an icon of what Rep. Darrel Issa described as "the department's deeply misguided effort to use taxpayer dollars as an investment bank for unproven technologies."

Within an hour of posting his rebuttal to the artificial report, over 700 people had "liked" the post and it had been "shared" elsewhere on the social networking site 267 times.

"On this day, Secretary Chu won the internet," wrote one commenter.

Chu is a co-recipient of the Nobel Prize for Physics and a former professor of physics and biology who has worked at the Lawrence Berkeley National Lab, University of California and Stanford University. He is 65 and announced Friday that he was stepping down from the post.