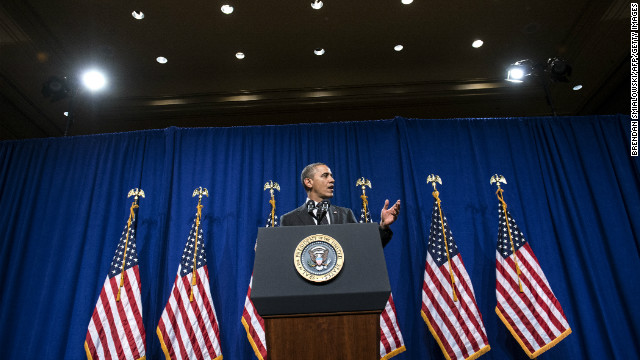 (CNN) – President Barack Obama, speaking Thursday to House members from his own party at a retreat outside Washington, said he remains committed to achieving a "big deal" on budgets and debt that would end Washington's penchant for "governance by crisis."

"I am prepared, eager and anxious to do a big deal, a big package that ends this governance by crisis where every two weeks or every two months or every six months we are threatening this hard won recovery," Obama told House Democrats.

Earlier this week Obama pressed Congress to pass an agreement putting off the across-the-board spending cuts that will automatically go into effect next month, saying that while a longer term solution was preferable, a short-term fix was necessary to prevent jobs losses and an economic slowdown.

He continued that call to House Democrats Thursday, soliciting their help in developing the kind of solution that lasts longer than a few months so that the country's fragile economic recovery can continue.

"Finally housing is starting to pick up and commercial real estate is starting to do better and the unemployment numbers are still too high but we are seeing some job growth," Obama said. "Businesses are investing and manufacturing is doing well and we continue to have these self-inflicted crises here in Washington that suddenly leads everybody to tap the brakes."

Obama's speech to House Democrats at their three-day retreat comes the day after he spoke to Democratic senators, who he'll also need to help shepherd major pieces of legislation during his second term. Aside from a large budget deal, Obama has vowed to make comprehensive immigration reform and gun control measures top priorities during his second term.

In his remarks Thursday, Obama told lawmakers that those issues and more would be included in next week's State of the Union address. Also included in Tuesday's speech will be a call for "an energy agenda that can make us less dependent on foreign oil," Obama said, echoing a vow made during his inauguration address to tackle climate change over the next four years.

The president said the issues he touches upon during his big annual address would all be viewed through the prism of fairness.

"We'll talk about that stuff, but all from the perspective of how are we making sure that somebody who works hard in this country, a cop or a teacher or a construction worker or a receptionist, that they can make it if they work hard and that their kids can make it and dream even bigger dreams than they have achieved?" Obama said.

The president's two speeches to Congressional Democrats come ahead of a busy legislative schedule that will pit the White House and Democrats against Republicans, who control the House of Representatives. In the past, deals brokered between the White House and the House GOP have left some Democrats disappointed, including deals averting a government shut down in 2011.

That dynamic could emerge again in 2013 on issues like gun control and immigration, where Democrats and Republicans hold opposing viewpoints, and where potential compromises could leave some liberal Democrats disappointed.

Mindful of those past disappointments, and conceding there would be times in the future "where you guys are mad at me," Obama changed the format of Thursday's event to allow for questions from the Democratic lawmakers, though journalists were not permitted to remain in the room for that portion of his event.

But during his remarks, Obama encouraged House Democrats Thursday to look beyond the day-to-day and remember what their goals were going into politics.

"As long as we keep in mind why we came here in the first place, as long as we think back to whatever inspired each of us to say maybe I can give something back … I have no doubt that we will continue the extraordinary progress that we've made already."