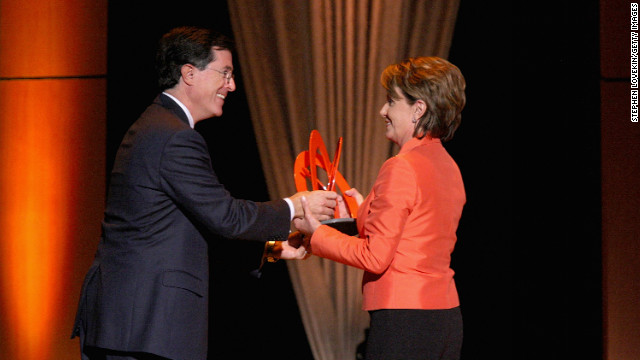 (CNN) - To the people of Colbert Nation, a retreat for Democratic House members may be the last place they'd expect to find Stephen Colbert.

Unless the comedian who plays a conservative on television is plotting to take the Democrats down.

Regardless of his agenda, Colbert will appear at the House Democratic Issues Conference on Friday, caucus chair Rep. Xavier Becerra told members on Thursday.

A senior democratic leadership aide told CNN of the announcement.

Becerra told members that Colbert will make remarks to the Democrats gathered at the event, then take questions from House Democratic Leader Nancy Pelosi.

About a year ago, the tables were turned.

She argued that super PACs and their massive donors should make public significant contributions much sooner than required under current law; Colbert, practitioner of a real super PAC he used as a gag on his show, argued otherwise.

But unlike Pelosi's calls for transparency in campaign finance, House Democrats announced no plans to allow reporters into the session with Colbert.

Colbert closed his super PAC shortly after the November election, diverting the $773,000 left in the account into a 501(c)4 organization, which has even fewer reporting requirements.

Colbert has taken questions from lawmakers before. He appeared at a 2010 House hearing on immigration and spoke from the viewpoint of the character he plays on television.