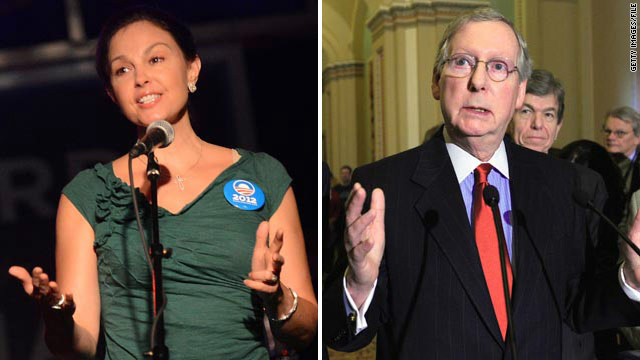 Almost two years out, it's rough in Kentucky

(CNN) – The U.S. Senate race in Kentucky is already the nastiest Senate fight in the country, twenty-one months before voters head to the polls.

Without an official Democratic candidate in the race, Republicans are going after actress Ashley Judd, who has expressed interest in running for the seat but has yet to officially declare her candidacy. She did, however, set up a feature for soliciting emails addresses on her website this week.

Meanwhile, Democrats are honing in on Senate Minority Leader Mitch McConnell for his stance on gun rights as new legislation moves through Congress.

The moves to consolidate GOP support for McConnell are paired with attacks on Ashley Judd from American Crossroads, the conservative super PAC co-founded by Karl Rove. The group began by spending $10,000 on a web ad earlier this week, lambasting Judd for her declared allegiance to President Barack Obama, and her love of Tennessee, the state neighboring Kentucky where she's lived for years.

Rove himself said Thursday that American Crossroads was "making fun of her" with the spot. "She is way far out on the left wing of the Democratic Party, which is not very far left in Kentucky."

The former top adviser to George W. Bush was speaking on Fox News, where he is a paid contributor.

"She's going to get to know that she's not going to be able to wait until the screenwriters from California and producers make her look good, and prepare the ads, and give her lots of lines to memorize so that she can handle these things. We're going to make her start saying where she's coming from," Rove said, referring to Judd's residence in Tennessee.

He also said to expect more attacks on Judd as the election gets closer.

"She doesn't want a long campaign, because this is just the opening story and ad," Rove said. "She's said a bunch of stuff that the people of Kentucky are not going to like, and we are going to lay it out in plenty of time for people to get a handle on it."

Responding to the initial ad from American Crossroads, a spokesman for Judd said "Ashley thanks Senator McConnell, Karl Rove, and their negative allies for all the attention as she considers her future political plans, although a decision hasn't been made yet."

Meanwhile, an outside group on the Democratic side is targeting Sen. Mitch McConnell, Judd's potential rival who serves as the Republican leader in the Senate.

The Progressive Change Campaign Committee said Friday they were expanding their ad buy hitting McConnell for his stance on gun control. On Tuesday the group announced they would spend $27,000 to air the ad for one week on broadcast and cable television in Kentucky and Washington, D.C.

That buy was expended Friday to include airings during Saturday night's Louisville vs. Notre Dame college basketball game. McConnell is an alumnus of the University of Louisville and a self-professed fan of their basketball team.

The ad will also air in commercial breaks during Obama's State of the Union address Tuesday.

"Thousands of families across Kentucky will tune into the basketball game, the Sunday political talk shows, and the State of the Union address. They will see that despite 82% of Kentuckians supporting criminal background checks for gun purchases, Mitch McConnell sides with the big gun industry that has spent $198,615 to get him elected," Adam Green, the co-founder of PCCC, said in a statement.